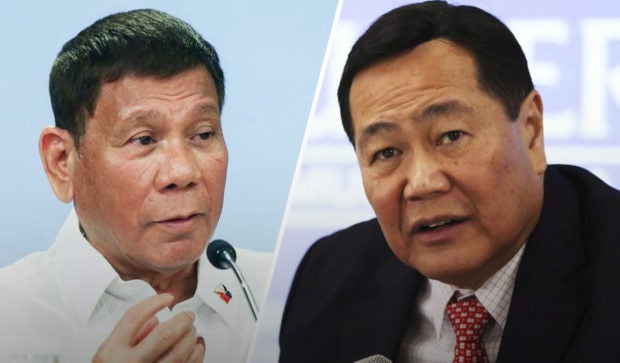 Duterte vs Carpio: The debate that never was.

MANILA, Philippines — Senator Panfilo Lacson on Tuesday called for an end to the West Philippine Sea debate between the Duterte administration and the opposition.

(This endless debate isn’t funny anymore. For me, it’s gone in a totally different direction already. So as far as I’m concerned, let’s stop talking about debates because it will not happen, period.)

The senator was speaking about President Rodrigo Duterte’s challenge for a West Philippine Sea debate with retired Supreme Court Associate Justice Antonio Carpio, particularly the 2016 ruling of the Permanent Court of Arbitration that gave the Philippines a historic victory over China.

Carpio had accepted the challenge, but Duterte later backed out and instead tapped his spokesman Harry Roque to participate on his behalf.

Carpio, however, rejected the proposed topics of the debate with Roque, saying it is “pointless” to debate about issues that are not being disputed.

On Monday, Roque then challenged Vice President Leni Robredo to debate whether or not President Rodrigo Duterte had given away any Philippine territory to China under his leadership.

(All these challenges with proxies seem to be an attempt for damage control to divert the issue on the President not taking on his own dare.)

“So if I may give unsolicited advice, the less they talk about that issue, I think we can all move forward,” Lacson added.