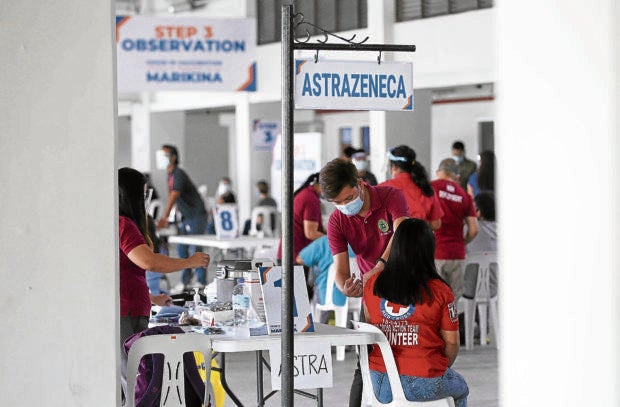 ANOTHER JAB Hospital workers and personnel of the Philippine National Police receive their AstraZenecaCOVID-19 shots at a vaccination center in Marikina City on March 24. —NIÑO JESUSORBETA

MANILA, Philippines — About half of the 2 million doses of AstraZeneca COVID-19 vaccines that arrived on Saturday will go to Metro Manila and the adjacent provinces of Rizal, Cavite, Laguna, and Bulacan — areas that compose the epicenter of the pandemic.

The vaccines will be given to healthcare workers, the elderly, and persons with medical conditions in these areas collectively known as the National Capital Region (NCR) Plus.

“We are distributing them across the country but we have focused on NCR Plus because this is where the epicenter of the disease is,” Health Undersecretary Maria Rosario Vergeire said on Monday.

The DOH also allocated 132,000 doses each to Central Visayas and the Davao region while Western Visayas will get 127,200 doses.

Last Friday, the DOH announced the resumption of AstraZeneca vaccination for those age 18 and above. It earlier suspended its use for persons below 60 years old due to reports in several countries of rare cases of vaccine-induced blood clotting.

The DOH said its advisory panel of experts and the Philippine College of Hematology and Transfusion Medicine concluded that there were currently no known risk factors to predict vaccine-induced blood clotting and that the benefits of receiving the vaccine against COVID-19 still outweighed the risks.

Vergeire said vaccine-induced thrombosis and thrombocytopenia (VITT) were very rare and no such case had occurred in the Philippines.

“We can’t identify the risk factors for these vaccine-induced thromboses, it means it can happen when a person has an autoimmune reaction to a vaccine. So our experts have recommended to continue vaccinating without any restrictions because there are no risk factors, no known predictors to these VITT,” she said.

The Pfizer-BioNTech vaccines, which are expected to arrive on Monday night, will be distributed only in Metro Manila, Cebu, and Davao because of their proven capability to handle vaccines requiring ultralow freezer storage.

“There are specific vaccines that require highly technical handling and storage. We give them to those who can handle them,” Vergeire said.

Health Secretary Francisco Duque III has also ordered the DOH to apply on behalf of China’s state-owned drug company Sinopharm for an emergency use authorization (EUA) of its COVID-19 vaccine.

The World Health Organization (WHO) last Friday listed the Sinopharm COVID-19 vaccine for emergency use, a tacit signal to country regulators to allow the vaccine’s rollout.

“This is something we do so we can facilitate the process of receiving vaccines, but everything undergoes the strict regulatory process,” Vergeire explained.

She said the DOH also applied for the EUAs of the COVAX-donated vaccines (AstraZeneca) and those given by China (Sinovac).

“The secretary (Duque) ordered us to do the EUA. This is advantageous to the government since it has the EUL (emergency use listing) and we have had preliminary talks with Sinopharm manufacturers and the Chinese government so it’s better if we already have an EUA,” Vergeire said.

“We are now asking for documents from the WHO and we are being helped by the Department of Finance because they are the head in the negotiations for vaccines. Once we complete it, we are going to apply for [EUA] immediately,” she said.

As of April 27, the DOH said 1,809,801 doses of Sinovac and AstraZeneca vaccines had been administered nationwide out of the available 3,525,600 doses.