Filipino rights groups based in US, Canada to help pursue EJK cases 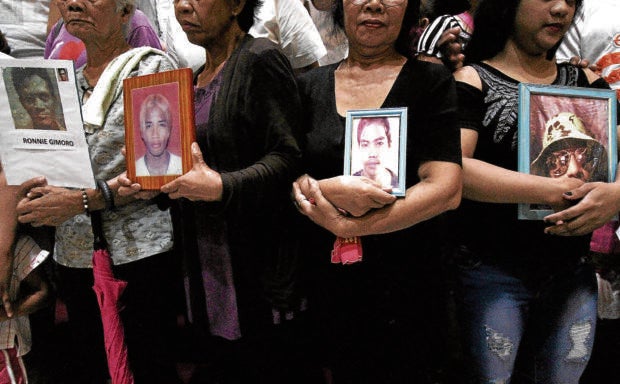 GRIEVING In this photo taken in 2017, relatives of victims of extrajudicial killings gather in a church in Manila to seek justice for their loved ones. —RICHARD A. REYES

MANILA, Philippines — A coalition of Filipino human rights advocates based in the United States and Canada has pledged to support the widows and orphans of those slain in the wave of extrajudicial killings (EJKs) brought about by the drug war on President Rodrigo Duterte’s watch.

This is also in line with lobbying efforts in those two countries in North America to hold the Philippine government accountable for its alleged human rights violations in Mr. Duterte’s drug war.

On Monday, the Filipino American Human Rights Alliance (Fahra) and the Global Pinoy Diaspora Canada (GPDC) announced they would provide “moral, financial, legal and political” support for victims whose families have sued the police for the deaths of their loved ones.

Ago Pedalizo, Fahra spokesperson, said in an interview that his group would back an initial six cases, with the help of lawyers providing free legal service as well as financial and psychosocial assistance from the group’s supporters.

Pedalizo said many survivors were supported by projects established precisely to assist them, like the Program Paghilom based on Tayuman Street in Manila.

He said that move was prompted in part by Justice Secretary Menardo Guevarra’s report in February before the United Nations Human Rights Council, in which he acknowledged several lapses in the government’s antidrug operations.

Guevarra’s report was based partly on a review of cases in Metro Manila and in the provinces of Cavite, Bulacan and Pampanga, which recorded among the highest fatalities in connection with the drug war.

Citing Guevarra’s own efforts, Malacañang has maintained that the country’s legal system is working to prosecute suspects in EJK cases.

But Pedalizo said the report to the UN was “an admission that there are cracks in the system and that they have done wrongdoing.”

“We’re holding on to that,” he added.

One such case which Fahra intends to pursue is the killing of 17-year-old Darwin Hamoy in 2016, Mr. Duterte’s first year in office, during a failed drug bust in Quezon City that would later be called the Payatas massacre. Three others were killed in that police operation.

Pedalizo expressed hope that the Hamoy case would lead to accountability against the police as well as Mr. Duterte. He also cited the preliminary examination against the President before the International Criminal Court.

Fahra and other groups in the United States and Canada have pledged to lobby against extending any support for the Philippine police until the human rights situation here improves.

Pedalizo said his group’s coalition with the GPDC represented a growing dissatisfaction with Mr. Duterte among overseas Filipino workers, although the President claims to have a strong following in that sector.

Rights groups in Canada have appealed to the Parliament to “end its policy of quiet diplomacy” in the Philippines, citing the country’s human rights situation. INQ