Health warning up as parts of PH sizzle | Inquirer News 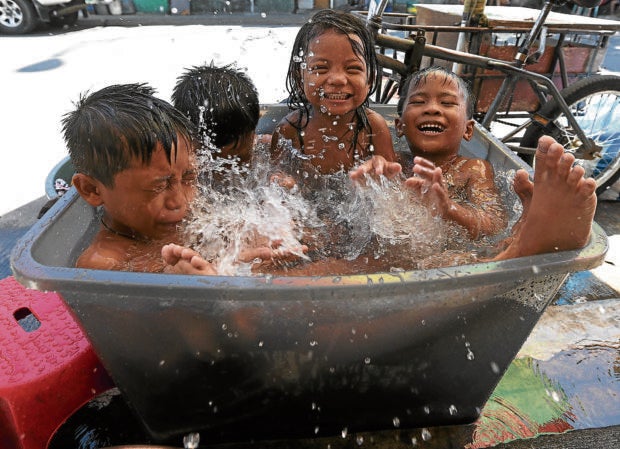 NO POOL? NO PROBLEM A plastic container filled with water is good enough to give these children on Kalayaan Avenue in Makati City a fun-filled day amid the intense heat in Metro Manila. —MARIANNE BERMUDEZ

MANILA, Philippines — Several parts in the country continued to sizzle to dangerous high levels, prompting the government weather service to advise the public to stay indoors to avoid potential heatstroke and exhaustion.

Dagupan in Pangasinan province posted the highest heat index at 46ºC on Monday afternoon but it was lower than the record high of 51ºC this year, also in the same city two days before.

The agency’s senior weather specialist, Chris Perez, said high temperatures would continue to prevail across the country throughout the dry season, or from March to May.

Residents in Mimaropa and Bicol regions, the Visayas and Mindanao may get slight relief from the extreme heat in the next few days due to the cloud cover brought by the intertropical convergence zone, or the area where the southern and northern winds meet.

The agency still cannot determine if such heat indices are normal during the dry season. Climate measurements require data taken over at least a 30-year period, and Perez said it had been recording only in the last 10 years.

But the recent figures are “very alarming,” said Perez, especially for those who are vulnerable to heatstrokes and exhaustion.

“As much as possible, the public should avoid unnecessary outdoor activity,” he said. “For those who have to be outdoors, they should take time to rest under the shade, drink water and bring umbrellas, which are both helpful against the heat and rains brought by localized thunderstorms.”

Despite the extreme temperature, there had been no reports of residents suffering from heatstrokes in Dagupan, said Dr. Joseph Roland Mejia, chief of Region I Medical Center.

“Maybe it’s a blessing in disguise that the imposed quarantine forces the people to stay inside their homes and hardly go outside where it is very hot,” Mejia told the Inquirer by phone on Monday.

Dr. Anna de Guzman, provincial health officer, said staying at home means people have access to bathrooms where they can take showers and those who can afford can use electric fans or air-conditioning units.

“We must also refrain from drinking coffee or tea as these are dehydrating beverages because these make us urinate often, so we lose water in our body,” she said.

She also cautioned the public against drinking soft drinks since these are high in sugar and make people thirsty.

—WITH A REPORT FROM YOLANDA SOTELO