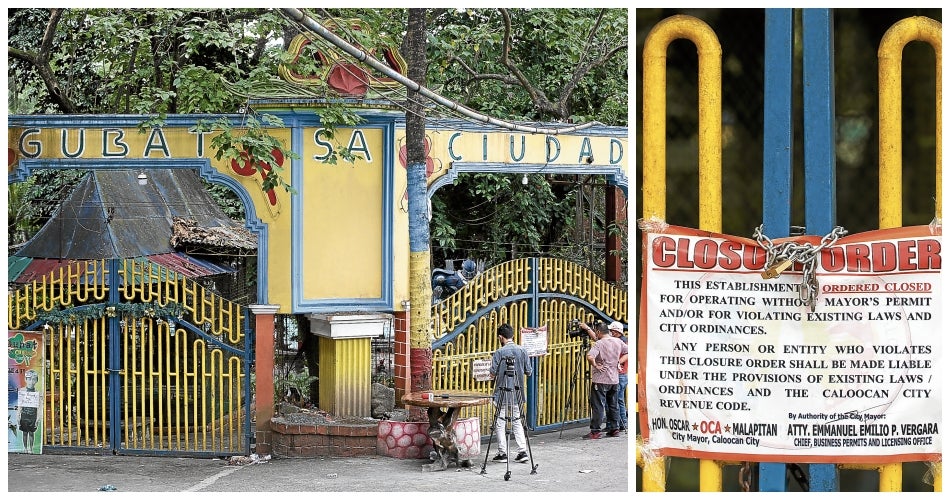 BUSINESS SHUTDOWN Caloocan CityMayor OscarMalapitan has ordered the closure of Gubat sa Ciudad resort over violations of health protocols imposed whileMetro Manila is under a modified enhanced community quarantine. On Sunday, people were photographed swimming in the resort pool despite restrictions on gatherings and limits on business operations. —NIÑO JESUS ORBETA

MANILA, Philippines — Experts from the OCTA Research group have recommended the slow and calibrated easing of quarantine restrictions in Metro Manila and four adjacent provinces to sustain the downward trend in COVID-19 numbers.

They have also proposed the strategic reallocation of vaccines to focus on Metro Manila and other highly infected areas.

OCTA’s Ranjit Rye and Butch Ong noted a generally declining trend in pandemic figures in the National Capital Region (NCR) Plus bubble—consisting of Metro Manila and the provinces of Bulacan, Cavite, Laguna and Rizal—which is under modified enhanced community quarantine (MECQ) until May 14.

“Right now, the trends are good, but we’re not yet where we’re supposed to be as far as managing the crisis in our region is concerned,” Rye said at the Laging Handa public briefing over state-run PTV 4.

“Yes, we are healing, yes, we’re trending in the right direction, but we’re still not yet there,” he said.

Ong said the daily new count of cases in the areas was still “way above our presurge levels.”

The Department of Health (DOH) confirmed 90 more deaths, 40 of whom were previously tagged as recoveries, bringing the death toll to 18,562.

Rye said the average daily attack rate, or the infections over the total population in a given area, remained high for many cities in Metro Manila, with only Navotas City below the critical level.

Occupancy of intensive care unit (ICU) beds was “almost at critical level” at 69 percent, Ong said, while the positivity rate was at 15 percent when the recommended rate is 5 percent.

The Inter-Agency Task Force for the Management of Emerging Infectious Diseases (IATF), the temporary body overseeing the government’s response to COVID-19, has yet to meet on the quarantine classification for the NCR Plus bubble.

But Harry Roque, President Duterte’s spokesperson, said easing the restrictions by May 15 was possible based on the IATF’s formula, which includes ICU utilization rate of less than the critical level of 70 percent.

“I will not second-guess the IATF, but pursuant to the formula, it is possible. Again, the final decision rests with the IATF,” Roque said.

Rye said OCTA would support whatever quarantine classification the government would decide to impose after May 14, but it advised caution.

“What we’re suggesting is a calibrated, slow exit strategy so that we can sustain the trends. Now whether it’s a GCQ (general community quarantine) or an MECQ, the terms don’t seem to be as accurate as we understood it last year,” he said.

He said the current MECQ in the NCR Plus bubble was more flexible than last year’s.

Moreover, Rye said, the country is now trying to prevent the entry of more contagious COVID-19 variants, including the one from India.

The genome sequencing on Filipino seafarers coming from India who tested positive for the virus has yet to be released. “We want to await that. That’s one area of caution that we want to focus on,” Rye said.

Roque said the IATF might not open the country’s borders as of now and that the travel bans could be extended.

The government has stopped travelers from India, Pakistan, Nepal, Sri Lanka and Bangladesh from entering the Philippines until May 14 to prevent the entry of the Indian coronavirus.

While public officials have been rolling out improvements in its COVID-19 response, Rye said many of these would require new infrastructure, training and expansion of hospital facilities, which, he pointed out, would take time.

“This is why it might be prudent to consider an (MECQ) extension at this point,” he said.

Should the quarantine category be extended, Rye said industries that had been closed could be allowed to open in a “calibrated fashion.”

“The key here is to have a gradual exit—whatever the government calls it—a gradual exit from the quarantine so as not to reverse the trend. The trend can easily reverse,” he said.

He stressed the need to continue complying with minimum public health standards to allow the country to exit from the surge. Some people, he noted, had become lax in observing the protocols.

OCTA’s Nicanor Austriaco said a slow, gradual reopening would give the national government more time to increase and enhance the nursing and health-care staff. This, he said, would allow all available hospital and treatment beds to be manned adequately.

Roque said that while the government respected OCTA’s recommendations, which are based on DOH data, it does not base its next move on the group’s views.

“Thank you to OCTA Research for your recommendation, but the truth is, we listen to the experts from the DOH,” he said in a press briefing.

The whole-of-government approach takes into consideration the views of the economists in the socioeconomic planning agency, Roque said.

“They are the ones who say that in the cost-benefit analysis, in the end, more people might die of hunger or go into poverty due to hunger if we extend the lockdown,” he said.

OCTA expected to release this week its modeling data that would support the proposal that the country focus its vaccination strategy on Metro Manila in order to reduce the total number of cases and accelerate the healing.

Austriaco said the government must vaccinate 45 to 50 percent of the capital region’s population, or 6 million, “before we see a substantial effect on the number of cases.”

This might be seen in the third or fourth quarter of the year, he added.

Rye said that in proposing that areas with a high number of cases be made a vaccination priority, OCTA believes this could slow down the epidemic in the country and hasten the opening of the economy.

“Bottom line, everybody would still be vaccinated, but NCR would be first. All health-care workers have to be vaccinated before our model can be implemented. It is based on certain assumptions,” he said.

“We have limited vaccines, let us see how we can strategically reallocate them to have the maximum effect as far as jump-starting our economy is concerned, apart from protecting our citizens,” Rye said.

Five laboratories did not submit data to the DOH on May 8.

—WITH A REPORT FROM DONA Z. PAZZIBUGAN INQ

Read Next
Health warning up as parts of PH sizzle
EDITORS' PICK
Palace: Duterte unfazed by ICC probe on drug war killings
Palace says ICC prosecutor report is ‘fantastical,’ based on ‘hearsay’
Smart brings KCON:TACT especially 4U to subscribers from June 19 to 27
Defending himself before ICC ‘logical thing to do’ for Duterte, says Drilon
Synology NAS: A photo storage and multimedia server for your home
Kai Sotto, Angelo Kouame lead Gilas final 12 vs South Korea
MOST READ
Opposition ‘must go beyond anti-Duterte platform’ in 2022 polls – Drilon
Duterte to meet with Sotto, Velasco to discuss fate of BARMM polls
Palace says ICC prosecutor report is ‘fantastical,’ based on ‘hearsay’
Sotto sees Sara, Pacquiao as ‘formidable competitors’ for president
Don't miss out on the latest news and information.