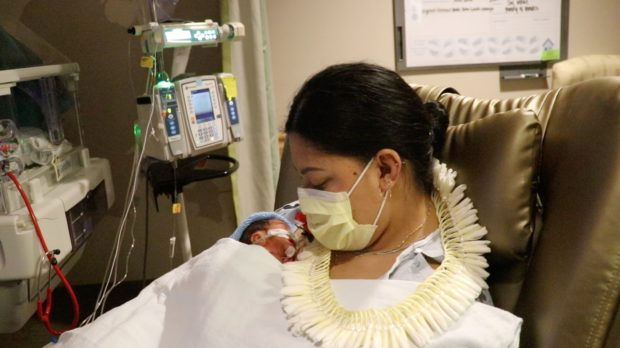 A woman who did not know she was pregnant gave birth during a flight to Honolulu, Hawaii. Luckily, the plane happened to have a doctor and three nurses on board to assist her with the delivery.

Lavinia Mounga was flying from Salt Lake City, Utah when she went on premature labor for her son Raymond on April 28, as per a news release by Hawaii Pacific Health on Sunday, May 2. She was only 29 weeks into her pregnancy when she gave birth.

Since the plane was not equipped to care for premature babies, the medical team used shoelaces to cut the umbilical cord and used microwaved bottles to serve as warmers for the newborn. They also used a watch to measure the baby’s heart rate.

Mounga and her baby were kept stable until the flight landed three hours later. Glenn also assured that emergency personnel took “great care” of the baby upon arriving in Hawaii.

Meanwhile, Mounga thinks it was “overwhelming” and “so lucky” that there was medical help available for her when she gave birth.

“The experience here has been so good,” she was quoted as saying. “It just feels comforting and everyone’s willing to help and always checking on us.”

The baby will have to stay in a hospital in Hawaii until the end of the month, Mounga’s sisters stated in a GoFundMe page they set up for the new mom.

“Our miracle baby nephew was born 29 weeks along with 3 hours left on our flight and was such a strong trooper. Our sister did not know she was pregnant so she was just as shocked as the rest of us when our nephew was born!” they said.

They added that the newborn is getting stronger while on intensive care, but will have to stay for a while in Hawaii until he is healthy enough to fly back to Utah with his mom. JB