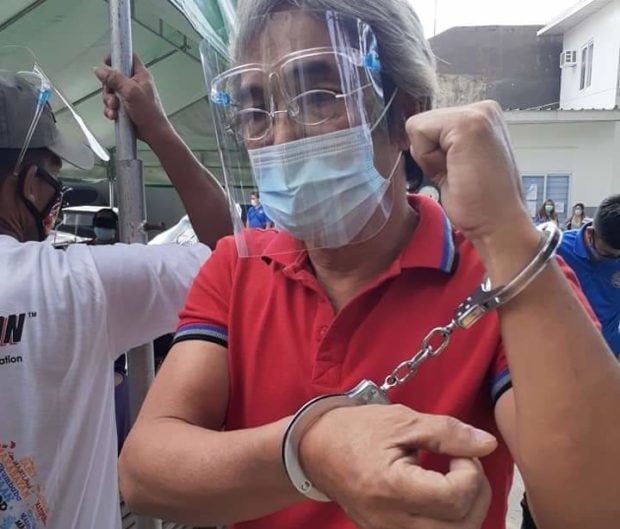 Bayan-Central Luzon chair Pol Viuya appears in court after almost a month of detention in a police camp in Tarlac City since his arrest last March 30 for illegal possession of firearms and explosives. PHOTO BY ALLAN BONIFACIO

CITY OF SAN FERNANDO—More than 50 activists held a picket outside the Regional Trial Court in Tarlac City on Tuesday (April 27) during a preliminary investigation of an illegal gun and explosives possession complaint filed by the police and military against Pol Viuya, Bagong Alyansang Makabayan (Bayan) Central Luzon chair.

It was the first time that Viuya, 57, was seen publicly following his arrest last March 30 and detention in Camp Makabulos, also in Tarlac City.

Protesters held placards declaring Viuya was an “activist, not a terrorist.”

Protesters said Viuya’s work was with those suffering from the impact of natural and man-made disasters which are far from the work of a terrorist.

“During the height of the pandemic and the onslaught of calamities in 2020, Viuya worked hard to pool resources and ensure that no one is left behind,” rights group Karapatan said in a statement.

“He coordinated with communities, addressed the needs of the most vulnerable. And he organized community kitchens long before community pantries became viral,” Karapatan said.