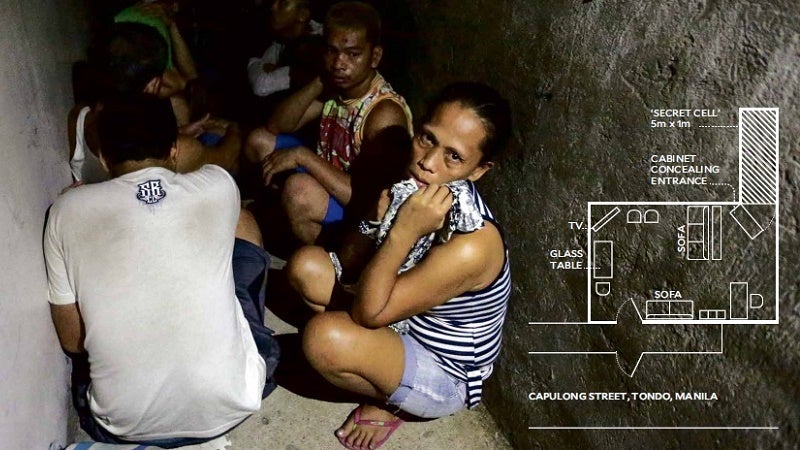 INTO THE LIGHT A woman detained in the secret jail of a Tondo police station squats with other drug suspects on the floor of a narrow cell found by a team from the Commission on Human Rights behind a wooden shelf (see sketch, inset). About a dozen men and women were found huddled inside. INQUIRER FILE PHOTO/RAFFY LERMA

MANILA, Philippines — The Office of the Ombudsman has dismissed charges against Manila police officers who were involved in the supposed secret detention facility for drug suspects, which was uncovered by the Commission on Human Rights (CHR) in 2017.

According to the joint resolution dated last July 28, 2020 but released on Tuesday, the Office of the Ombudsman dismissed the case because the CHR was unable to present strong  evidence against the officers whom they accused of conducting arbitrary detention and maltreatment of prisoners, among other cases.

During the inspection, CHR found a dozen men and women in a narrow cell behind a cabinet at the Raxabago Station’s Drug Enforcement Unit.  CHR said that the inspection was conducted after a tip reached their office.

“CHR failed to establish probable cause against respondents for the crimes of Arbitrary Detention and Delay in the Delivery of Detained Persons to the Proper Judicial Authority.  It failed to show by clear and strong evidence that the detained persons were being held beyond the period allowed by law without a complaint being filed against them,” the joint resolution said.

“Sans evidence to prove that the sworn statements of the detainees were observed under duress, such allegation remains a mere presumption and cannot be a basis for holding respondents liable,” it added.

During the CHR investigation, they claimed that the secret detention facility was not fit to handle inmates as it was cramped, dark, and unsanitary as some inmates are forced to defecate in plastic bags.

At least three police officers from MPD during that time were mentioned in the complaint made by CHR: P/Supt. Robert Domingo, PO2 Dylan Verdan, PO1 Berly Apolonio.

In his defense, Domingo explained that all the detainees in the secret detention facility — which MPD refers to as a holding room — were all arrested during a legitimate operation.

He also noted that since they had congested detention facilities since more than 70 persons deprived of liberty were inside the station, they decided to separate detainees into an area that is near the Drug Enforcement Unit and to ensure that they were secured.

Furthermore, Domingo said that budgetary constraints have forced them to be resourceful.

“Moving on to the administrative aspect, it is beyond dispute that the twelve newly arrested persons were detained inside a cramped space.  However, there is no showing that the respondents did so in bad faith,” the Ombudsman said.

“Since the burden of proof relies on the CHR, it was incumbent upon said office to prove that there was another available confinement area which is better than the one where said detainees were locked up, but that respondents intentionally and maliciously refused to accord them such,” it added.