Lawyers from the Commission on Human Rights (CHR), following a tip about drug suspects being held for extortion, were surprised and shocked when they found a dozen men and women detained in a secret cell behind a shelf in a Manila police station on Thursday.

Gilbert Boisner, regional director of the CHR for Metro Manila, said at least four of the 12 claimed that they were locked in the cell at Raxabago station’s drug enforcement unit (DEU) in Tondo.

Boisner said the alleged drug suspects’ arrests were not even recorded.

“They have been picked and they have to pay up to be freed. That’s the allegation,” he told reporters. “I’m really mad. Did you see that? It’s terrible. … My God!”

Supt. Robert Domingo, Raxabago station commander, at first denied there was a hidden cell inside the station.

But Boisner, following the tip from an informant, proceeded to inspect a brown bookshelf in the DEU office, knocking on the wooden wall behind it and then heard voices responding.

“Someone’s here,” a woman said from behind the wall.

The CHR looked for ways to open the shelf and found and removed an L-shaped metal serving as a lock.

Behind the shelf was a passage that led to the dark, cramped and windowless cell. 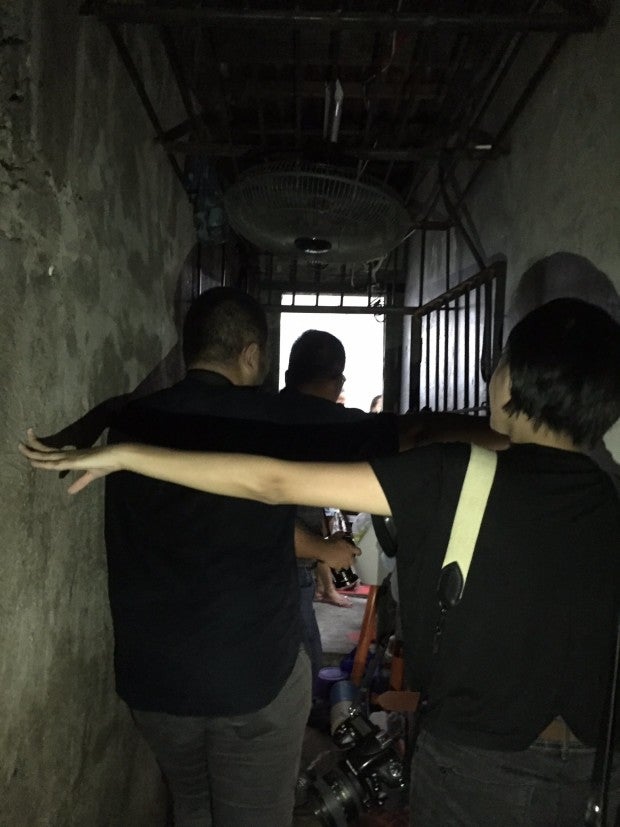 The sight shocked the CHR team.

“They (police) asked if this was a surprise inspection. But I’m the one surprised,” Boisner said.

The 12 men and women rescued from the secret cell said they were arrested but no cases were filed against them.

Boisner said there also was no record of the alleged drug suspects’ arrests.

Lawyer Brenda Canapi, head of the CHR’s jail visitorial division, expressed disgust at the “inhumane” condition of the suspects.

He insisted that those detained in the hidden cell were arrested on Wednesday during the station’s “one time, big time” antinarcotics
operation.

Domingo said his men could not mix the drug suspects with  other detainees in the station’s main detention cell “because cases have yet
to be filed against them.”

He said cases against the detainees in the main lockup had already been filed with the Manila prosecutor’s office.

Domingo also denied allegations that his men were extorting money from the drug suspects.

He said none of his men had asked money from the suspects.

The detainees were removed from the secret cell but were not released because charges would be filed against them, he said.

The cell, about a meter wide and five meters long,  used to hold trash. It  had no light and was poorly ventilated.

‘Their word against ours’

“It’s such a waste of space. Why should I not maximize it?” Domingo said, adding that the shelf was used merely to cover the entrance to
the cell.

He said the police enjoyed the presumption of regularity, and that it was “their word against our word,” referring to  the drug suspects.