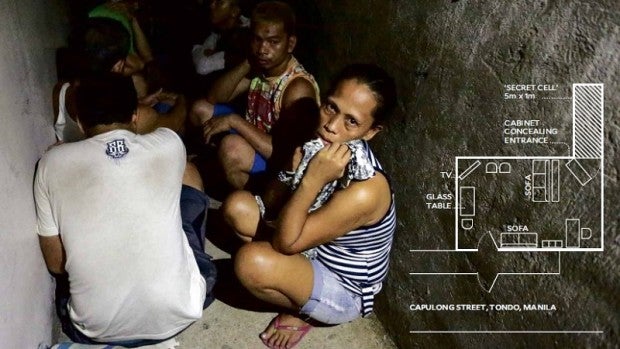 INTO THE LIGHT A woman detained in the secret jail of a Tondo police station squats with other drug suspects on the floor of a narrow cell found by a team from the Commission on Human Rights behind a wooden shelf (see sketch, inset). About a dozen men and women were found huddled inside on Thursday night. RAFFY LERMA

It’s hard to keep things private inside the secret jail cell in the heart of Tondo, where detainees urinate, defecate, eat, bathe, and sleep in a space that’s roughly 1 meter by 5 meters.

The Commission on Human Rights (CHR) called the lockup a holding area for suspects who had complained that they were being used by drug enforcement officers as milking cows. Supt. Robert Domingo, the station chief, denied the allegations.

Inside the cramped, dark passageway where Raxabago police station hid and packed drug suspects like sardines, Beatrice (not her real name) saw three different penises in the four days she was kept there.

Beatrice admitted she was a drug pusher. She started selling drugs to fund her schooling. Three of her family members sold “shabu” (methamphetamine hydrochloride) too.

Raxabago officers arrested her last month. She said at that time she committed no violations. She just happened to be on their list of targets. They picked her up and brought her to their office on Capulong Street.

The cops did not bother to get her full name and there was no record of her in the blotter. They just ordered her to come with them to the station for violating the Dangerous Drugs Act.

From the office’s front door, the officers told her to stand in front of a brown wooden bookshelf on one corner of the drug enforcement unit (DEU) office. 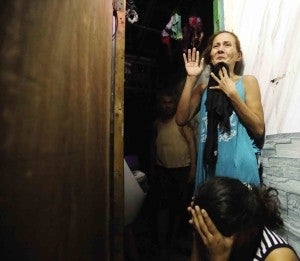 ‘JUST MAXIMIZING SPACE’ Supt. Robert Domingo (above), chief of the Manila Police District Station 1, shows the media the narrow jail cell that he says he built to “make the most” of the station’s limited space. A woman detainee (below) tearfully recalls how the police allegedly forced them to pay their way out of the harrowing conditions inside the secret cell.

She did not understand why she had to stand there until an officer removed a hidden latch in one of the shelf’s racks. Then, the bookshelf swung open like a door and led to the dungeon-like secret cell.

“There were about 20 people there at that time. I couldn’t believe it. There were men and women. Some were sitting, some were standing. You can’t lie down because you won’t fit,” she said.

The secret cell was kept and maintained by the DEU on Capulong Street. The office looked like a typical police office. There were also couches, a computer, a TV. Up on the walls were the prints of the mission and vision of the Philippine National Police, neatly framed.

On another wall was a copy of the Miranda Doctrine, which protects and ensures the rights of an arrested suspect. She never heard the officers read it to her. Close to it were portraits of the Virgin Mary and a figure of Michael the Archangel, leader of God’s army of angels.

Another wall separates the religious figures and the bookshelf filled with documents, also known as the secret door.

The male and female detainees were separated by metal bars. Technically, there were two cells behind the bookshelf. Female detainees stay close to the shelf, while the male detainees are cramped close to a garbage dump filled with plastic bottles, among others. Another metal divider separates the trash heap from the male inmates.

It’s in that garbage dump that these detainees dispose of their feces and urine. So technically, they sleep beside their excrement.

“When someone defecates, sometimes the officer outside would shout at us asking who had relieved himself.  ‘You’re like pigs! We can smell it outside, what more inside,’” she said.

When men piss or take a bath, they do so in full view of everyone. But the women use a green towel-like cloth as makeshift bath curtain as cover.

Fellow female inmates hold the towel up and face the men to ensure no one’s peeping. 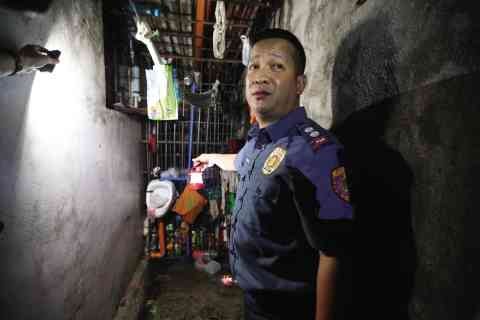 The secret cell keeps the secrets of the DEU office, too, the detainees interviewed by Inquirer said. These allegedly include torture and under-the-table negotiations for a suspect’s release, according to CHR’s Gilbert Boisner.

Beatrice said suspects detained there were often involved in illegal activities, such as drug dealing and drug use. They’re a mix of legally and illegally arrested suspects, according to the detainees.

The suspects are held usually for one week, the time given to the suspects to raise money for their release — from P40,000 to P200,000 per head.

“If you fail to provide money within one week, they will file a case against you and transfer you to the regular jail cell at the station’s main entrance,” Beatrice said.

A team of CHR lawyers uncovered this secret cell during a surprise inspection late on Thursday. Boisner, the CHR National Capital Region chief, said four former detainees went to their office to complain against the police.

Domingo, the station commander, denied any wrongdoing and insisted the suspects were kept there because he needed to “maximize” the use of available space.

He initially denied there was a secret cell. But Boisner relentlessly searched for it until he saw the odd bookshelf.

Inside the dark cell, there was no way to tell what time it was – chowtime — breakfast, lunch and dinner.

There’s no clock or a window to show the time of day. The meals given to certain inmates three times a day serve as the only sign that there is still life outside.

“Certain inmates” because not all detainees get to eat, according to Ezra (not his real name). The police station does not provide food to people they arrest.

“No family visit, no food. Some steal other inmates’ food. Some depend on the kindness of others,” Ezra told the Inquirer.

There are times secrets are heard behind the door and there are times you have to press your ear against the wall to listen to what’s going on on the other side.

Beatrice said she had heard men cry and shout “aray” (ouch!) after meeting “Bulldog.” Bulldog is a wooden paddle used to hit suspects’ thighs, Beatrice said. Only men have been beaten this way.

Some of the detainees have been in and out of the secret cell several times. “They keep doing their illegal activities so the cops keep rearresting them. No cases were filed because, like me, they paid in exchange of their release,” she said.

The hellish experience sank some of the detainees to bankruptcy, and dragged them even deeper into the illegal drug business.

“They are buried deeper in debt and then they go back to (drug) dealing because they have to recoup what they had paid,” Beatrice said.

When Beatrice first arrived, she thought she’d die. But a fellow inmate told her: “You don’t have to worry as long as you have money.”

She had paid P40,000 for her freedom. Her family had to sell their house to raise that amount.