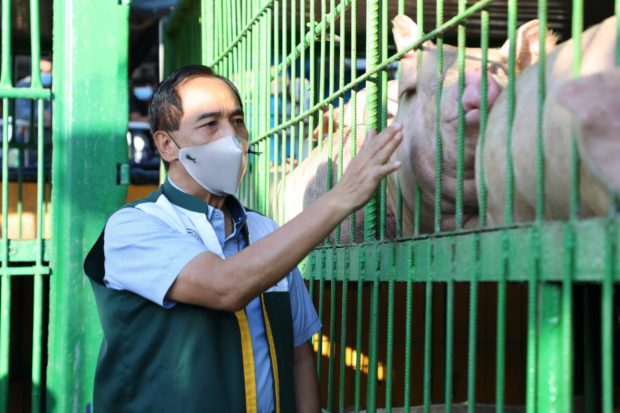 Agriculture Secretary William Dar cries foul at insinuations that the department is a manipulator of pork data imports.

MANILA,  Philippines— To say that the Department of  Agriculture (DA) is manipulating data is “uncalled for,”  DA Secretary  William Dar told a Senate hearing on  Tuesday.

“I’d like to take exception that we are manipulating data. That’s not our work,” Dar said during the hearing of the Senate Committee of the  Whole looking into the food security crisis brought about by the African Swine Fever (ASF) outbreak.

Because of the outbreak, the government temporarily lowered the tariff rates for imported pork products and considered raising the minimum access volume (MAV)  on pork imports from 54,000 metric tons (MT) to 400,000 MT.

Dar insisted the decision was based on the government’s data.

“…So mahirap naming sabihin na kami ay manipulator ng data, that’s uncalled for. I take exception to that,” he said.

The DA chief apparently was reacting to a “data manipulation” comment earlier made by the Chairman and President of the National Federation of Hog Farmers, Chester Warren Tan, at the same hearing.

Tan noted that the Department of Agriculture gave Congress “bundles of data” to justify the lowering of tariffs and the raising of the MAV for pork products.

“However, there [is] data manipulation at times…or at times discarding  PSA data is something we needed to point out,” he said.

Dar also protested to claims the ASF outbreak hadn’t been addressed by DA.

(I’m also offended by claims that we don’t do anything about ASF, that we’re the ones to blame for it.)

He said critics should see the “realities of the whole situation.”

But that didn’t stop Senator Cynthia Villar, chairperson of the Senate committee on agriculture, from asking Dar how the government came up with the cap of 400,000 MT on imported pork.

Villar reiterated that the hog raisers did not oppose importation because all they questioned was the huge increase in the MAV Congress might enact.

(It’s not the increase in MAV we’re angry about, it’s the quantity because it’s too high.)