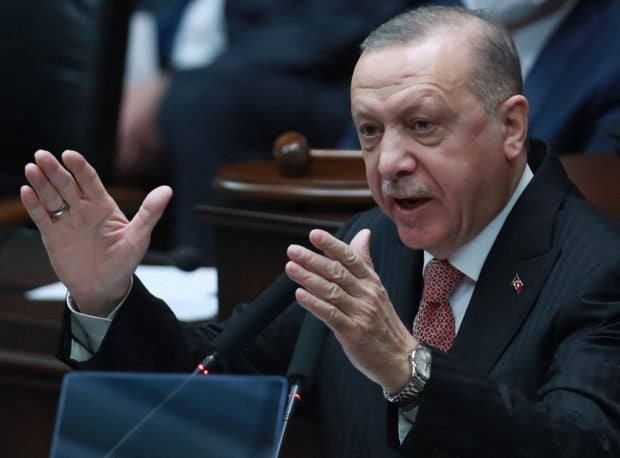 Erdogan had issued a carefully-worded statement moments before Biden made his landmark announcement on Saturday at a ceremony commemorating the tragic 1915-17 events.

But the Turkish president did not hold back his anger in a televised address that he also used to point out the US history of slavery and persecution of Native Americans.

“The US president has made comments that are groundless and unfair,” Erdogan said.

“We believe that these comments were included in the declaration following pressure from radical Armenian groups and anti-Turkish circles. But this situation does not reduce the destructive impact of these comments.”

The Armenians — supported by historians and scholars — say 1.5 million of their people died in a genocide committed under the Ottoman Empire during World War I.

But Turkey vehemently denies a deliberate policy of genocide and notes that the term had not been legally defined at the time.

Biden tried to temper the inevitable Turkish anger by calling Erdogan for the first time since taking office in January.

The two leaders agreed in Friday’s phone call to meet on the sidelines of a NATO summit in June.

But Erdogan said on Monday that Biden needed “to look in the mirror” when calling the century-old events a genocide.

“We can also talk about what happened to Native Americans, Blacks and in Vietnam,” Erdogan said.

Turkey on Saturday summoned the US ambassador to complain that Biden’s decision had opened “a wound in relations that is difficult to repair”.

Washington had been bracing for a furious Turkish response.

The United States closed its Ankara embassy and the consulate in Istanbul and two other cities for citizen and visa services as a precaution for Monday and Tuesday.

The embassy also issued an advisory to US citizens in Turkey “to avoid the areas around US government buildings, and exercise heightened caution in locations where Americans or foreigners may gather”.

Dozens of angry Turks shouted slogans and held up banners at a rally on Monday outside the US consulate in Istanbul.

“Turkish people, stand up against American lies,” said one banner. Another called on Turkey to shut down an air base US forces have been using since the Cold War.

Biden’s administration has made human rights and other prickly issues a prominent feature of Turkish-US relations.

“The level of Turkish-US relations has regressed,” Erdogan said.

But he added on a more optimistic note that he was “convinced that a new door can be opened when we meet in June” at the NATO meeting in Brussels.