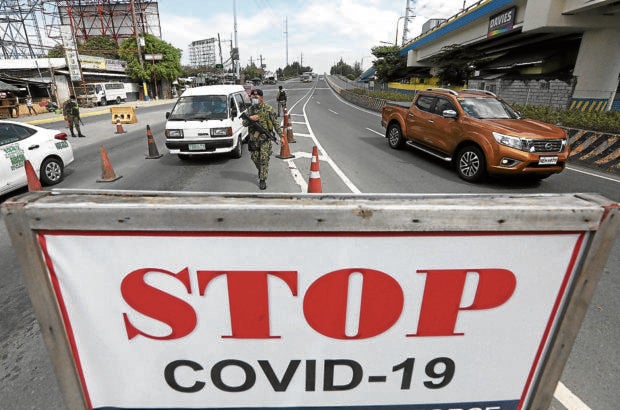 CHECKPOINT In this photo taken on March 22, policemen guard the boundary of Cavite and Metro Manila as the national capital and its nearby provinces are placed under lockdown due to a surge in COVID-19 cases. INQUIRER file photo / MARIANNE BERMUDEZ

MANILA, Philippines — Several House leaders and lawmakers filed a bill that seeks to penalize acts of government “negligence, inaction, and irresponsibility” in ties of state of public health emergency such as the COVID-19 pandemic.

Under House Bill No. 9230, a copy of which was sent to the media on Tuesday, lists several prohibited acts imposed on public officials during public health emergencies such as negligence in crafting necessary government response to the health crisis and failure to follow standard health protocols.

Among the prohibited acts in the measure include gross violation of standard health protocols promulgated by the government and negligence in the performance of duty relative to securing needed medicines, vaccines, supplies, or facilities necessary in the containment or eradication of public health threat.

Other prohibited acts include:

The penalties vary depending on the violated act. For instance, negligence is penalized with imprisonment of nor less than five tears nor more than 20 years, perpetual disqualification from public office, and confiscation or forfeiture in favor of the government of any prohibited interest and unexplained wealth manifestly out of proportion to his salary and other lawful income.

Meanwhile, receiving any gift in connection with any contract or transaction with the government is punishable by reclusion perpetual and perpetual disqualification from public office if the aggregate count of the gifts is not less than P1 million.

“This measure helps to raise the bar of public service during such time of crisis and difficulty so that people will not be left at the mercies of unperforming, unresponsive, negligent, and worst, corrupt public officers and employees,” the lawmakers said.