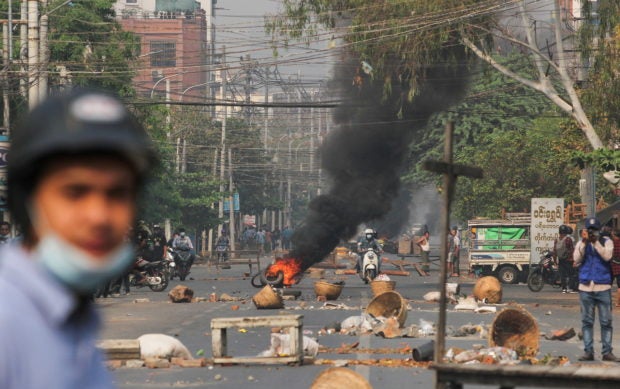 Tires burn on a street as protests against the military coup continue, in Mandalay, Myanmar March 27, 2021. REUTERS/Stringer

MELBOURNE — Australia called on Friday for Myanmar’s ruling military to immediately release an Australian economic adviser to the deposed leader Aung San Suu Kyi, who has been detained for two months.

Sean Turnell, a professor of economics at Macquarie University in Sydney who has been advising Suu Kyi for years, was reportedly charged a week ago under Myanmar’s official secrets law, together with Suu Kyi and some of her ministers.

Calling it an “arbitrary detention,” Australia’s Department of Foreign Affairs and Trade said in a statement that Turnell had been detained with limited consular access.

“Australia continues to seek his immediate release and official information about the reasons for his detention both in Myanmar and through the embassy in Australia,” a foreign ministry spokesperson said in a statement. “We call on the military regime to allow Professor Turnell to return to his family in Australia.”

Turnell was the first foreign national to be arrested after the Feb. 1 military coup overthrew Suu Kyi’s government.