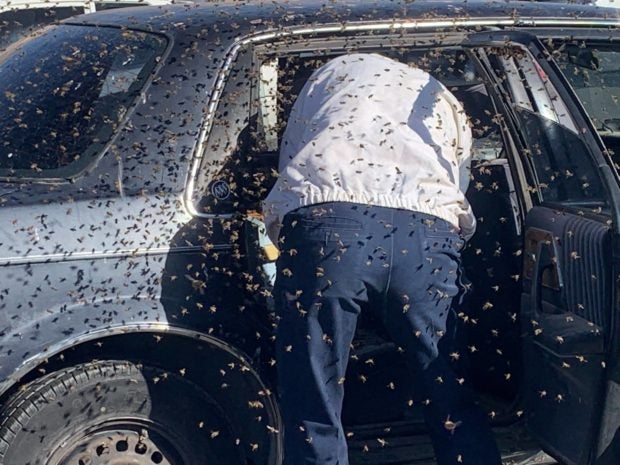 A man who left his car windows open while shopping at a grocery store unexpectedly had his vehicle invaded by a swarm of bees.

Around 15,000 bees invaded the car when the man, whose name was withheld, on March 28 went to buy groceries in New Mexico, United States, Las Cruces Fire Department reported in a March 30 release.

The man did not even initially realize the bee invasion as he was still able to put his groceries in his car and drive away. After noticing the swarm in the backseat, he called the Las Cruces firefighters for help.

“After blocking off the immediate area to ensure the safety of nearby shoppers, Las Cruces firefighters called upon the services of off-duty firefighter Jesse Johnson who, in his spare time, is a beekeeper,” the fire department said.

“Johnson arrived with the proper tools for the trade – a hive kit, lemongrass oil, gloves and proper attire – and was successful in removing the bees from the car and relocating them to a more suitable location,” they added.

The Las Cruces Fire Department’s release on Facebook came with several photos of the incident, showing Johnson in full beekeeper gear getting the swarm out of the car.

Authorities reported that a security guard was stung during the almost two-hour ordeal, but no major injuries were reported.

The swarm has since been rehomed to Johnson’s property outside of city limits, according to the fire department.  /ra