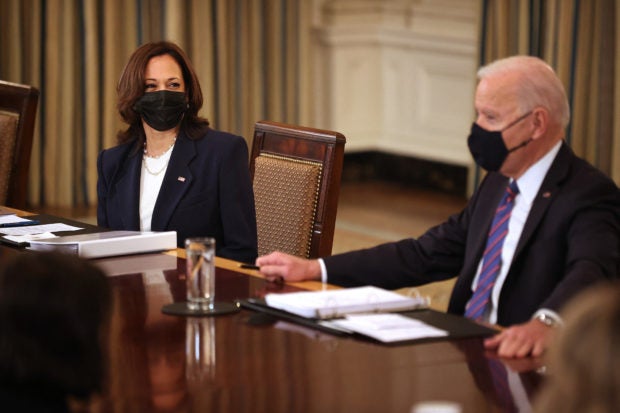 WASHINGTON, DC – MARCH 24: U.S. Vice President Kamala Harris (L) and President Joe Biden meet with cabinet memebrs and immigration advisors in the State Dining Room on March 24, 2021 in Washington, DC. With the number of migrants apprehended at the U.S.-Mexico border reaching a two-decade high, Biden announced that Harris will be leading the White House efforts to handle the crisis at the border. (Photo by CHIP SOMODEVILLA / GETTY IMAGES NORTH AMERICA / Getty Images via AFP)

WASHINGTON – US President Joe Biden on Wednesday put Vice President Kamala Harris in charge of handling the influx of migrants at the Mexican border, addressing a row that has galvanized his critics.

“I can think of nobody who is better qualified to do this,” Biden said at a White House meeting with Harris by his side.

“When she speaks, she speaks for me,” Biden said, adding: “I give you a tough job.”

Harris said there was “no question that this is a challenging situation.”

Thousands of migrants have sought to enter the United States in recent weeks as they flee violence in impoverished Central America.

While increases in migration are common at this time of year, Republicans have called the influx a crisis and accused Biden of emboldening migrants by relaxing the harsher policies of his predecessor Donald Trump.