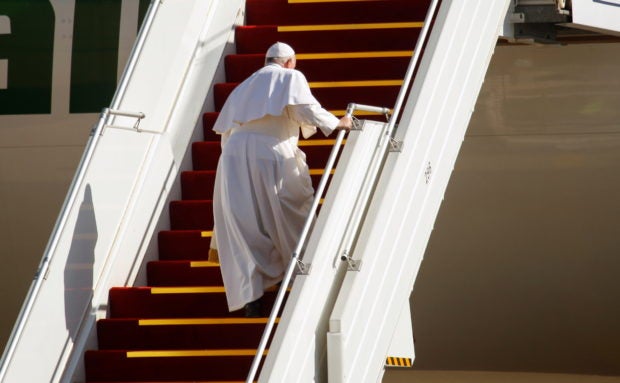 Pope Francis met Grand Ayatollah Ali Sistani — the authority for most Shiite Muslims around the world — in the Iraqi city of Najaf during the first-ever visit to the country by a pontiff.

“The Pope’s visit to Iraq was a very good and important visit,” ministry spokesman Saeed Khatibzadeh told reporters at a press conference.

The “constructive” trip was made possible thanks to a “calm and secure Iraq,” he said.

Khatibzadeh’s comments represent the first reaction to the visit by an official in Iran, a Shiite-majority nation like Iraq.

“Iraq, with the braveries of the Iraqi people, the wisdom of the (religious) authority, and the pure blood that was shed in the face of extremism and foreign conspiracies, has now reached a state of security,” he added.

Iraq proclaimed victory over IS in late 2017.

“The meeting with Iraq’s high (religious) authority, Ayatollah Sistani, on its own showed interreligious dialogue and closeness between religions,” Khatibzadeh said.

He noted that it conveyed “no other message than dialogue, peace, and friendship between religions and cooperation between civilizations, in contrast to those who seek violence and bloodshed”.

Sistani, while an Iranian national, is considered a critic of the ‘Wiliyat-i-Faqih’ (Guardianship of Islamic Jurists) doctrine in power in Iran, and is seen to prefer a separation of religion and state.

In Baghdad on Friday, Pope Francis called for an end to violence and extremism and urged officials in Iraq to do more to fight corruption.

The Pope’s visit to Iraq has also been received positively by much of Iran’s press.