‘Journalism is not a crime’: Campus journos slam threats vs UP student publications 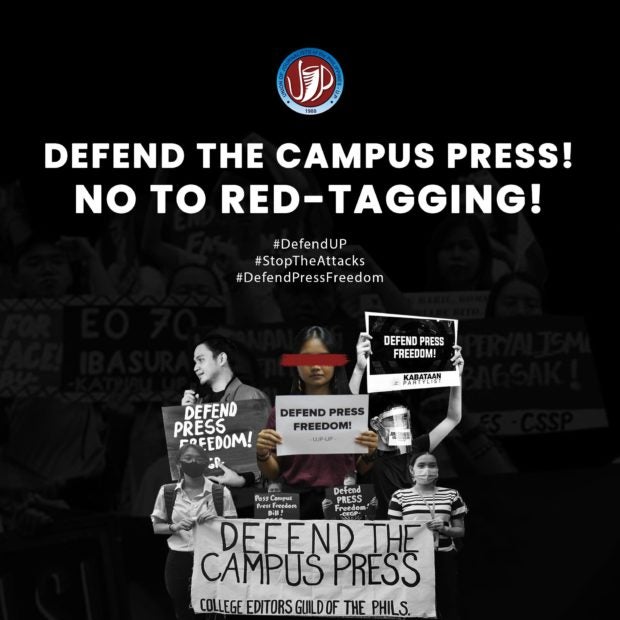 ‘WE ARE NOT TERRORISTS.’ Student journalists from the University of the Philippines condemn the recent Red-tagging and intimidation against various campus publications. (Photo: UJP-UP)

MANILA, Philippines — “We reiterate the truth: we are not terrorists.”

Student journalists from the University of the Philippines (UP) have denounced the Red-tagging and harassment against various campus publications and organizations.

Tinig ng Plaridel, the official student publication of the UP College of Mass Communication (CMC), revealed in a Facebook post on Monday that it received death threats from a suspected troll account.

The Philippine Collegian, the university’s official student publication, also reported that an anonymous profile accused its staff of being “wanted terrorist reporters,” together with other UP student publications and its systemwide alliance, UP Solidaridad.

The unidentified sender also threatened the publication “of getting assassinated if they continued engaging in their work as part of the alternative press.”

In a razor-sharp statement, the Philippine Collegian condemned the attacks made against it and other campus newspapers, pointing out that the accusations “imperil the life and safety of student journalists.”

“While none of us are wanted nor terrorists, this is not something we take lightly, especially at a time when even such implications could lead to unlawful arrest and, even worse, death in cold blood,” the statement read.

Meanwhile, Tinig ng Plaridel underscored its tradition of critical reportage and maintained its commitment against any threats to campus press freedom.

“It is a given fact that campus journalists in this country have long been at the receiving end of the most gruesome attacks from the state and its forces in the form of harassment, intimidation, threats, and killings,” the publication said.

Members and organizations of the university have constantly found themselves at the receiving end of vitriol from various individuals and government officials, who continue to reinforce the idea that UP is a “breeding ground for terrorist activities.” President Rodrigo Duterte himself made this claim in his previous speeches.

Earlier this year, the Department of National Defense (DND) unilaterally terminated the long-standing UP-DND Accord. Justifying the scrapping of the agreement, Defense Secretary Delfin Lorenzana claimed that “there is an ongoing clandestine recruitment inside UP campuses nationwide for membership in the CPP-NPA.”

Members of the country’s premier state university, which has a deep-rooted history of advocating for human rights and victims of state injustice, quickly stood their ground against the government’s Red-tagging and pointed out that “dissent is not a crime.”

“Rather than have the government focus on providing medical resources and ensure the safe reopening of classes, the priority of this administration is indeed to continue its tired tactics of red-tagging students and threatening our lives,” Student Regent Renee Co said in a Facebook post.

READ: ‘No ground for tyrants:’ UP community denounces DND scrapping of 1989 pact

The press, too, is not spared from these threats. Media practitioners have been labeled as enemies of the state for publishing stories and taking positions that are perceived as critical of the government.

In its statement, the Philippine Collegian recalled how Manila Times columnist Rigoberto Tiglao falsely accused the publication of being a legal front of the Communist Party of the Philippines (CPP), further stressing how such a move is “nonetheless perilous and can provide future cover for threats of suppression, if left unchallenged.”

Last year, the UP CMC denounced the National Task Force to End Local Armed Conflict (NTF-ELCAC) for baselessly accusing one of its student organizations, the Union of Journalists of the Philippines-UP (UJP-UP), as a communist front.

It can be recalled that Lt. Gen. Antonio Parlade of NTF-ELCAC had Red-tagged various media and student organizations, including UJP-UP, for criticizing the shutdown of media giant ABS-CBN and using the issue to promote “communist” ideals.

UJP-UP, in a statement against the recent threats against student publications, pointed out that “efforts to delegitimize campus journalists as truth-tellers […] have become the norm.”

Nothing will ever deter campus journalists from publishing the truth, not even despicable acts of intimidation by the…

These attacks go beyond the campus press: earlier this month, several groups and media organizations denounced Parlade after he tagged INQUIRER.net reporter Tetch Torres-Tupas as a “propagandist” for writing an article on the Aetas who filed a petition before the Supreme Court (SC).

In December last year, Manila Today editor Lady Ann Salem was arrested at her house in Mandaluyong City by police officers. UP CMC, who called for its alumna’s immediate release, pointed out that Salem’s arrest came nine days after AlterMidya, a national network of alternative media organizations, was red-tagged at a Senate hearing by NTF-ELCAC.

“The circumstances behind her arrest mirror the cases of activists like Reina Mae Nasino and Amanda Lacaba Echanis. Just like them, Icy (Salem) has been red-tagged in the past,” UP CMC said.

Various organizations and human rights groups have doubled down on its unrelenting stance against Red-tagging, which has intensified under the Duterte administration. Amnesty International (AI) previously called on the Philippine government to stop labeling groups or individuals perceived to be critical of the government as “communists” or “terrorists.”

“Instead of maligning and endangering people for the lawful exercise of their freedom of expression, the government should seek to address legitimate criticism of its policies and practices,” AI said.

One of the government’s most controversial moves is the passage of the Anti-Terrorism Act of 2020, which is currently facing a constitutional challenge in the country’s highest court. Critics have warned that the administration might use the law to prosecute political opponents; supporters have said it is not intended to curtail civil liberties.

“[T]he true intent of the terror law [is] to clamp down on our freedoms and to threaten anyone that stands in the way of this fascist regime,” Cristina Palabay, secretary-general of rights organization Karapatan, said in her criticism of the law.

In a statement denouncing the recent threats on the campus press, the College Editors’ Guild of the Philippines (CEGP) called out Duterte for “fixating his priorities on his critics rather than the problems that needed to be addressed.”

The recent spate of attacks on campus press continues under the tyrannical Duterte regime.Among the latest of whom…

Posted by College Editors Guild of the Philippines on Sunday, February 28, 2021

“It is all the more imperative for journalists to shed greater light on marginal voices, to hold officials to account, and remain unfazed in our reportage,” the Philippine Collegian said.