EXPLAINER: Why children must be vaccinated vs rubella, tigdas, polio

MANILA, Philippines — Even while the government scurries to obtain enough supply of Covid-19 vaccines, the inoculation drive to protect Filipino children against other dangerous viruses – rubella, measles (tigdas), and polio – continues.

Meanwhile, the combination of MR vaccines and OPV drops would only be provided to children in Region 3-Central Luzon, Region 4A-CALABARZON, Region 6-Western Visayas, and Region 7-Central Visayas. 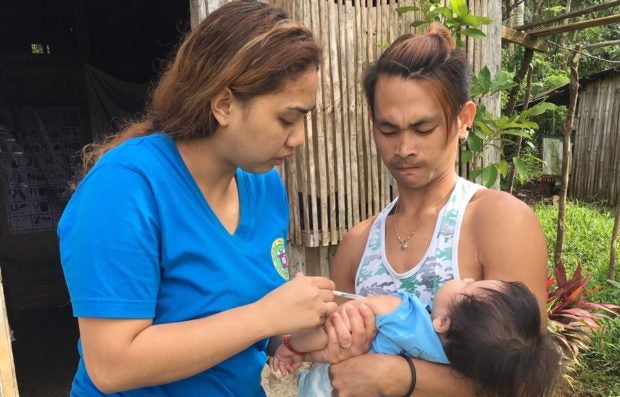 (FILE PHOTO) A health worker injects a child with a vaccine against measles in Kalayaan, Laguna, in February 2019. —(Photo from DOH Calabarzon)

On January 27, DOH’s National Immunization Program head Dr. Maria Wilda Silva warned that the polio outbreak in the country has yet to be put under control. She also said a major measles outbreak is inevitable without a massive vaccination drive.

Thus, the DOH urged parents and guardians to coordinate with their respective local health workers or barangay officials to avail of the vaccines against rubella, tigdas, and polio for their children.

But what should parents and guardians know about these three viruses that endanger children?

Based on the information provided by DOH on its Facebook page, German measles is caused by a virus called rubella. If a woman becomes infected with rubella during pregnancy, it can lead to miscarriage or serious problems for the unborn baby. It is also said that rubella is a contagious virus that mostly affects children.

Rubella can be passed on by an infected person through droplets produced by coughing or sneezing. Symptoms of this type of measles include low-grade fever, fatigue, enlarged and/or tender lymph nodes, rashes, and inflamed red eyes.

The health department explained that there is no cure for rubella and that the only effective way to prevent contracting the disease is through routine immunization.

The first dose of MMR (measles, mumps, rubella) vaccine should be given during the first 9 months of the baby. A second dose should be administered when the child turns one year old.

Another type of measles that is commonly known in the Philippines is “tigdas.” Caused by a virus called paramyxovirus, tigdas is also described as a highly contagious viral disease that can cause complications such as pneumonia, ear (otitis meda) and conjunctivitis, diarrhea, encephalitis (inflammation of the brain), malnutrition, and even death.

According to DOH, tigdas is airborne and can be spread even when an infected person simply talks, coughs, or sneezes. Individuals or children who have contracted paramyxovirus should be isolated to avoid transmission. 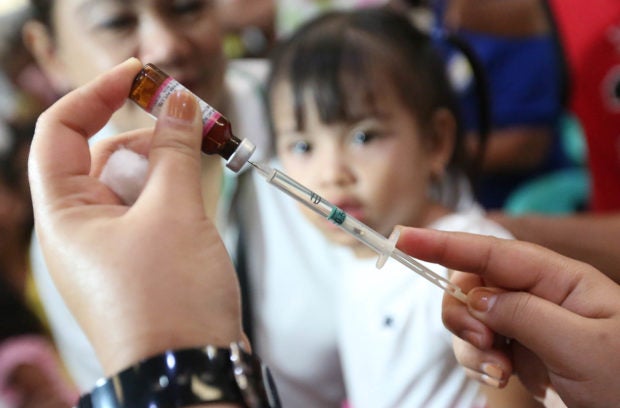 “The infected droplets may also land on a surface, where they remain active and contagious for several hours. You can contract the virus by putting your fingers in your mouth or nose or rubbing your eyes after touching the infected surface,” U.S.-based nonprofit organization Mayo Clinic also explained on its website.

DOH listed fever, conjunctivitis, cough, coryza, and red rash as the most common symptoms of tigdas. Like rubella, there is no medication or cure for measles and only MMR vaccines can lessen the chances of contracting the disease.

Mayo Clinic noted that although rubella and tigdas share some symptoms such as red rash, rubella is caused by a different virus and is not as contagious or severe as tigdas.

The World Health Organization (WHO) has cited the country’s low immunization coverage in several communities as among the reasons why the Philippines had a measles outbreak two years ago.

“Initial figures for 2018 indicate further decrease. As a result, many children have become susceptible to measles infection,” it added.

READ: PH 3rd highest in number of measles cases – WHO

Health Secretary Francisco Duque III in August 2019 attributed the drop in immunization rate to the public’s fear of vaccines due to the controversy surrounding the anti-dengue shots, Dengvaxia.

Polio is described as a life-threatening disease caused by the poliovirus, which attacks the spinal cord and nerves that are responsible for the body’s movement, according to DOH. Polio can lead to paralysis or weakness in the legs and/or arms. It also affects the diaphragm, which results in breathing difficulties.

The Centers for Disease Control and Prevention (CDC) explained on its website that the majority of those who get polio infection will not experience or exhibit visible symptoms. 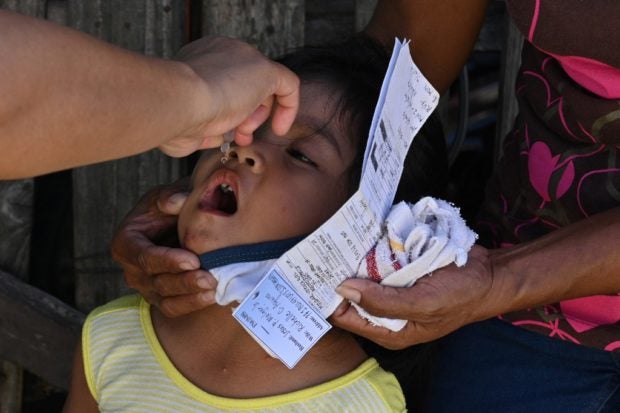 This photo taken on September 21, 2020, shows a municipal health worker (L) applying drops of a polio vaccine to a child at a relocation site for informal settlers in San Jose Del Monte in Bulacan province, north of Manila. (Photo by Ted ALJIBE / AFP FILE)

Some of the lesser-seen symptoms of polio are fever, sore throat, fatigue, nausea, headache, stomach pain, and paresthesia, or a feeling of pins and needles in the legs.

The poliovirus is a highly transmissible bug that can spread through person-to-person contact. The DOH explained that it can enter the body through the mouth. This happens when a person had contact with the feces of an infected person or inhaled droplets from a cough or sneeze of an infected person.

Touching your mouth with hands or objects contaminated with the feces of an infected person can also increase the risk of getting the disease.

DOH said the first dose of the OPV should be given to one and a half-month-old babies while the second dose should be given once the babies turn two and a half months old. The third dose, it added, must be administered together with an Inactivated Polio Vaccine (IPV) when the baby turns three months old.

In September 2019, nearly two decades after the country was declared polio-free, the DOH confirmed the resurgence of polio as it recorded its first case in Lanao del Sur.

How effective are MR vaccines and OPV drops?

Meanwhile, two doses of the vaccine will have a 97% efficacy rate against measles.

OPV, on the other hand, has been recognized by the WHO as a  highly effective vaccine against poliovirus-induced poliomyelitis.

“The oral poliovirus vaccine stimulates the immune system to produce anti-poliovirus antibodies against poliovirus types 1, 2, and 3,” WHO said in a July 2012 statement.

“The live virus persists in the intestine of receiving children for 4-6 weeks, inducing both mucosal and serum anti-poliovirus antibodies capable of neutralizing wild poliovirus,” it explained.