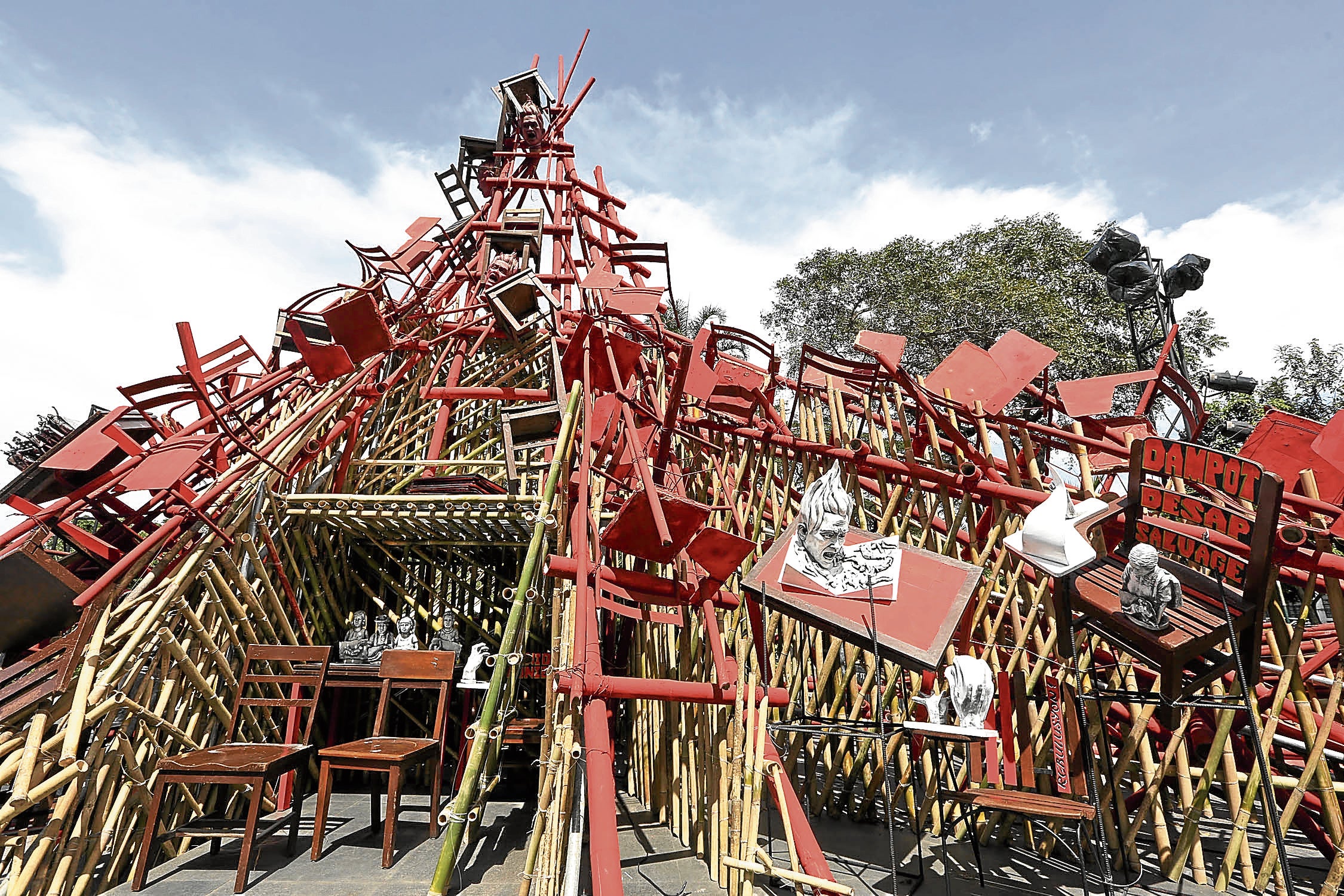 PIECE DE RESISTANCE Toym Imao’s towering barricades of bamboo and chairs commemorating the 1971 Diliman Commune have suddenly turned into a potent symbol of the University of the Philippines’ resistance against a fresh siege on freedom following the abrogation of its 1989 pact with the Department of National Defense. —NIÑO JESUS ORBETA

MANILA, Philippines — The history of the University of the Philippines (UP) is rife with encounters—but not the kind of underground guerrilla warfare the military thinks is seething within its storied walls.

Just like the 1971 Diliman Commune that burnished UP’s reputation as a self-sufficient republic, most of these “encounters” are, in fact, acts of resistance against state forces attempting to shrink UP’s safe spaces.

This was what renowned sculptor and painter Toym Imao had in mind when he assembled “engKWENTrO,” a two-part art installation project to commemorate the 50th anniversary of the student movement that precipitated the decadeslong resistance against dictator Ferdinand Marcos.

The first and larger one, “Barikada” formed two towering barricades of bamboo and chairs along Quezon Hall, both the commune’s ground zero and UP’s seat of power. It is symbolic of the same barricades of chairs and desks that protesting students set up 50 years ago to bar police from entering the campus.

The night they finished installing the barricades, Imao learned that the 1989 UP-DND (Department of National Defense) accord that had protected the university from state forces for 30 years was unilaterally abrogated by Defense Secretary Delfin Lorenzana.

Overnight, his barricades transformed into a potent symbol of UP’s fierce resistance against what Imao called the latest siege against one of the strongholds of democracy.

So “what was supposed to be an artwork [intended] to be a visual reminder, a memorial, became a form of protest art,” Imao said. “It was uncanny timing.”

It’s not hard to spot the parallelisms between 1971 and 2021, Imao noted. Both years saw the rise of authoritarian powers that weaponized the communist scare to prey on its enemies.

Back then, students broke out from the classrooms and into the streets, leading to violent standoffs with police.

But even if there are no physical clashes now, the accord’s termination still “attacks the entire paradigm” of the classroom as a free sanctuary of ideas, Imao said.

In terminating the agreement, Lorenzana claimed that UP had become a hotbed of communist rebel recruitment. But “it is unavoidable that UP can be branded because it is open to all kinds of ideas, may it be fascist, may it be radical, militant or anything,” Imao said.

“Its duty is to arm its students with the best possible tools for analysis. It is up to them how they will act to contribute to the nation. But the state cannot dictate how best to ‘serve’ the nation.”

It’s why many see the portents of a second commune. But Imao is unsure whether life will imitate his art.

“It is for the (younger) generation to decide,” he said. “If there would be another Diliman Commune, it might not even be a physical one. The world has changed so much that there are several platforms already that sentiments of defiance can be expressed.”

As always, Imao’s own resistance took the form of art and sculpture.

The two-part engKWENTrO, the latest in his staggering portfolio of oeuvres depicting social conditions and national history, is actually the second phase in a three-year project commemorating three historical events that are celebrating their 50th anniversaries: the First Quarter Storm (2020), Diliman Commune (2021) and the proclamation of martial law (2022).

This year’s Barikada is actually a descended form of last year’s “Nagbabadyang Unos” (An Impending Storm): a massive 60-foot-wide structure of spiked bamboo and repurposed chairs and classroom furniture forming a crown of thorns—or a floating barricade. 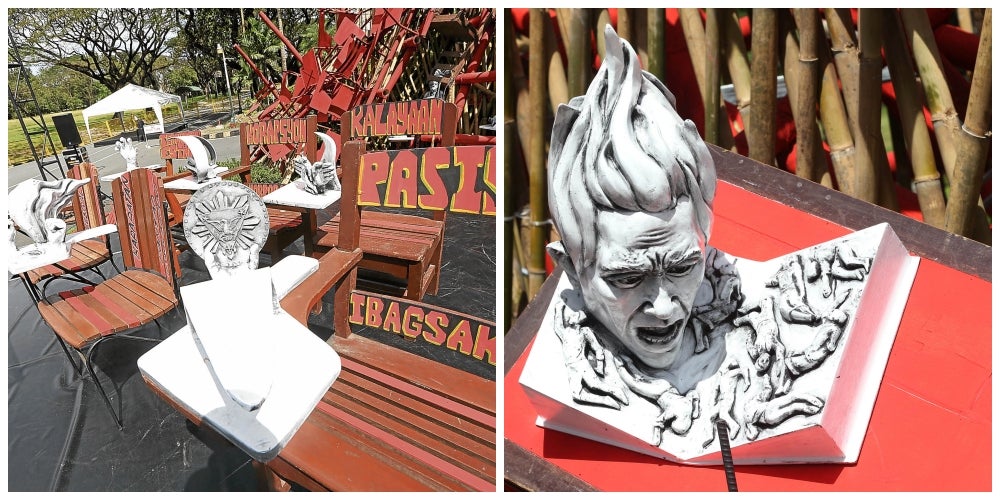 It had hung over the historic steps of Palma Hall for more than a month, just before President Duterte announced a Luzon-wide lockdown against the pandemic.

“The purpose then was to remind people of the building authoritarian moves by Marcos, which was exactly what happened during the pandemic when the government took this opportunity to flex its grip over the country under the guise of containing the pandemic,” he said. “It took on a new meaning and was recontextualized.”

The second piece in engKWENTrO, “Muebles” (furniture), is a series of sculptural reliefs embedded on some 50 upcycled class tables, desks, and chairs to represent narratives from events leading to the 1971 commune.

The pieces will travel across the centers of student movement: Palma and Melchor Hall, and Vinzons Plaza, before coming to rest within the Barikada.

All the chairs and tables used in both artworks were either repurposed or condemned. By bringing them out from the context of the classroom toward the streets, the works become a “symbolical act of breaking out from the four corners of the classroom,” said Imao, himself a graduate and professor at the UP College of Fine Arts.

Of course, Imao is conscious that his work could put him in the crosshairs of the government, whose Red-tagging spree branded both his home college and organization, the UP Mountaineers, as fronts for communist recruitment.

Several colleagues in the arts, like Carlos Palanca awardee and playwright Liza Magtoto, have also been tagged as New People’s Army recruits.

That artists are being singled out is unsurprising, since their work “can easily be misunderstood [especially] if you don’t have an appreciation for the kinds of free expression,” Imao said.

“They will consider it as an attack to power,” he warned. “But truth-telling is important. [I] owe it to my children, my students, and the university, who has given me an opportunity to be an enlightened individual.”

Imao “does not pretend like [his works] have the answer to everything.”

“It can trigger discourse, or it can just prick at the emotions,” he said. “This is just my simple and humble contribution. It depends on how it would register on people. If they will move, good. If not we’ll try harder and we’ll try to convince the next day and the next day after that.” INQ