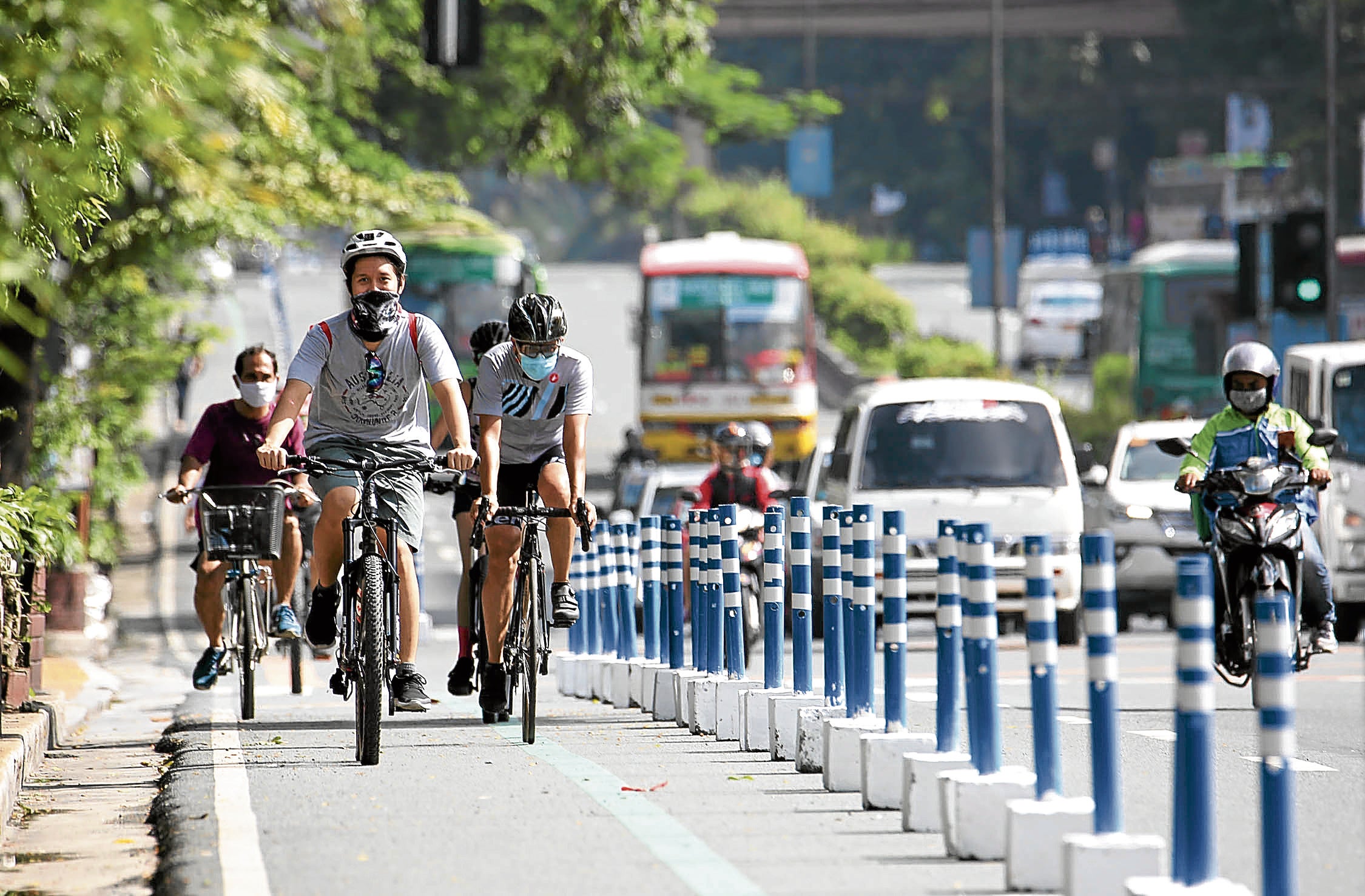 BIKE LANE As the number of bikers surged during the months-long lockdown, the Quezon City government allotted a separate lane for them on East Avenue for their own safety in this Aug. 23, 2020, file photo. —NIÑO JESUS ORBETA

MANILA, Philippines — In September last year, freelance photographer and writer Lester Babiera created First Bike Ride, an online community for cycling beginners amid an emerging bike culture among Filipinos having to deal with limited public transport during the pandemic.

First Bike Ride (@firstbikeride) advocates inclusive cycling, highlighting experiences of bikers from all walks of life across the country. Through its social media posts, the platform tells the challenges faced by bikers, from newbies to veterans, vendors, fitness enthusiasts and even the deaf.

It shares biking tips and compiles bike-friendly establishments in Metro Manila and nearby provinces, as well as spaces with available bike parking.

According to a recent Social Weather Stations (SWS) survey, an overwhelming majority of adult Filipinos expressed strong support for cycling, as well as walking, and roads that give priority to public and active transport.

The Nov. 21 to 25 nationwide survey last year, commissioned by the Department of Health, asked 1,500 adult respondents about public and alternative forms of transportation being implemented during the period.

It found 87 percent of the respondents agreeing that “the roads in Philippine cities and municipalities will be better off if public transportation, bicycles and pedestrians are given priority over private vehicles,” while only 6 percent disagreed for a very strong net agreement of +81.

Eighty-five percent also agreed that it was possible for their city or municipality to become a great place for walking and cycling, while 8 percent disagreed, resulting in a “very strong” net agreement score of +77.

Net agreement with the statement that public and active transport should be given priority was higher in the Visayas (+88) and Metro Manila (+85) compared with Mindanao (+80) and Luzon outside Metro Manila (+78).

By socioeconomic class, support for public and alternative forms of transportation was higher among Classes D (+83) and ABC (+82) than among Class E (+74).

Support for making cities and town biking- and walking- friendly was higher in Visayas (+85) than in Luzon outside Metro Manila (+82) Metro Manila (+75) and Mindanao (+62).

Babiera said wide sidewalks and protected bike lanes were important factors in making a community a great and safe place for bikers and pedestrians.

“Roads designed for pedestrians and cyclists are important. For me, they should be the priority when we build transportation infrastructure because they are the most vulnerable road users,” he said.

Babiera turned to biking as a way to move around the metropolis during the pandemic.

By creating First Bike Ride, he said he wanted to raise awareness about cycling and encourage people to bike. He believed that better roads would follow when more people use bikes.

“If more people use bikes, the government will be pressured to fix the roads. Now, with more people cycling, bike lanes were created and motorists are becoming more educated about pedestrians and bikers,” Babiera said. INQ

Your subscription could not be saved. Please try again.
Your subscription has been successful.
Read Next
Illusionist finds ‘new way to do magic’
EDITORS' PICK
Omega Speedmaster super racing: Tiny device massive change
Fuel price rollback expected on Feb 7
House energy committee chair Arroyo bats for cheap electricity
Philippine-United States alliance ‘rock solid’ — DFA
Makabayan bloc blasts bid to expand US access to more military bases in PH
vivo Philippines offers a free bouquet of flowers and a premium necklace perfect for Valentine’s Day
MOST READ
Vice Ganda gets called out for ‘unfair treatment’ of ‘It’s Showtime’ co-host Karylle
Fuel price rollback expected on Feb 7
Kris Aquino gets ‘renewed confidence’ after consultation with new doctor: ‘I have a strong chance of getting better’
Pokwang tells self amid revelations on past relationship: ‘Bangon, nanay ka’
Don't miss out on the latest news and information.