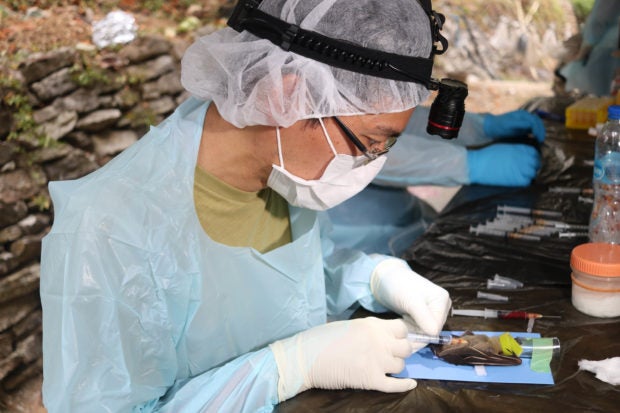 SIMULATION MODEL Ecologists sedate insect-eating bats from Mt. Makiling prior to collecting oral and rectal swabs from the night creatures as part of the University of the Philippines Los Baños’ research to create a “simulation model” for preventing outbreaks of bat-derived diseases. —PHOTO COURTESY OF UPLB MUSEUM OF NATURAL HISTORY

MANILA, Philippines — Humans are not the only ones being swabbed for detection of the new coronavirus, but also bats—those fly-by-night, hung-upside-down-by-day creatures after which the Dark Knight of Gotham City is named.

At the University of the Philippines Los Baños (UPLB) in Laguna province, researchers have resumed a study of coronaviruses found in bats, as scientists around the world try to come to terms with SARS-CoV-2 and help prevent another zoonotic outbreak.

SARS-CoV-2, the new coronavirus that causes COVID-19, belongs to a large family of coronavirus called Coronaviridae.

Phillip Alviola, a professor of UPLB and a bat ecologist who leads Filipino experts in a collaborative research with universities in Japan and Vietnam, said the local researchers collected oral and rectal swabs from 13 insectivorous (insect-eating) bats from Mt. Makiling in late January.

Since 2017, the UPLB scientists have documented 15 virus genotypes in 12 bat species across the Philippines, among them the coronavirus, hantavirus and gamma herpesvirus.

The research hopes to create a “simulation model” to predict outbreaks of bat-derived diseases, for instance by determining specific periods when bats carry higher viral loads or are themselves immunocompromised, Alviola said.

Viruses spill over to humans when bats shed urine or feces, while there is no evidence of virus transmission to humans through bat bites, he said.

In the Philippines, guano, or bat manure, is collected for fertilizer in some communities, while bats are present not only in caves or natural parks with high tourist traffic but also in urban centers.

“Any of the coronavirus that we found in Philippine bats could be a potentially virulent coronavirus genotype [and] could lead to a pandemic, similar to what happened in China,” he said.

Scientists said the closest relative of SARS-CoV-2 was a coronavirus identified as BatCoV RatG13, which was previously detected in intermediate horseshoe bats (Rhinolophus affinis) in Yunnan Province, China.

While studies have found a 96.2 percent similarity between the bat virus and SARS-CoV-2, scientists have yet to locate the animal origin or the particular bat species that harbor the virus, Alviola said.

In 2014, an outbreak of henipavirus was reported in Sultan Kudarat province that left 10 people dead.

The U.S. Centers for Disease Control and Prevention said the virus was transmitted from pteropid bats to horses and from horses to humans.

“For several years of evolutionary arms race, bats have adapted not to overreact to these viruses [that some of them even] carry with apparent ease,” Alviola said.

Also part of the research team is veterinarian Joseph Masangkay, curator for wildlife diseases at the UPLB Museum of Natural History.

The collected specimens are stored in a minus 80 degrees Celsius freezer at the UPLB College of Veterinary Medicine, waiting to be transported for genome detection and sequencing in Japan when international travel curbs ease up.

The project is funded by the Japan Science and Technology Agency.

In April 2020, the International Union for Conservation of Nature (IUCN) Bat Specialist Group recommended the suspension of field activities involving bats due to risks of reverse zoonosis— human-to-bat transmission of SARS-CoV-2.

By June, the IUCN recommended the use of protective gear for researchers handling bats.

The protection works both ways for humans and bats, amid a pandemic that has infected more than 100 million people and killed 2 million worldwide, Alviola said. INQ