Health authorities on Saturday said they have found 16 more cases of the new variant of the coronavirus that first emerged in the United Kingdom last year and advised a northern town where most of them were detected to extend its lockdown.

Mayor Franklin Odsey of Bontoc town, Mountain Province, where 12 of the cases were found, had earlier imposed a two-week lockdown on his town through the end of the month and ordered 79 households in seven villages to stay indoors.

“Our recommendation was to continue it for an additional two weeks so that we can be able to confine the cases to that area,” Health Undersecretary Maria Rosario Vergeire said at the Laging Handa briefing.

The recommendation came from the experts subgroup in the Inter-Agency Task Force for the Management of Emerging Infectious Diseases, Vergeire said.

In addition to the first case disclosed to the public last week, there were 17 known cases of the UK variant in the country as of Saturday. 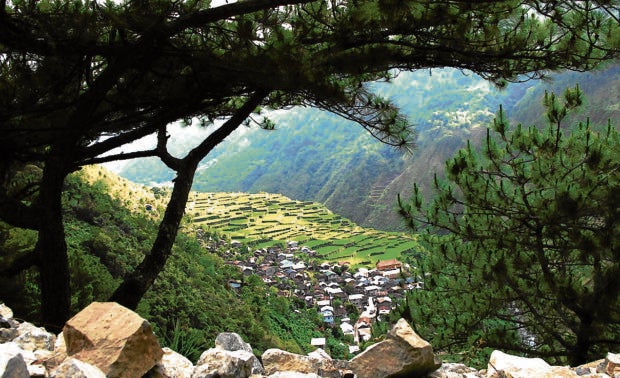 BORDERS WATCHED Mayor Franklin Odsey of Bontoc, Mountain Province, where 12 of the 16 new cases of the UK coronavirus variant have been found, imposed a two-week lockdown on his town through the end of the month and ordered 79 households in seven villages to stay indoors. —EV ESPIRITU

The first case was a Filipino businessman from Quezon City who had returned from the United Arab Emirates on Jan. 7 and was found positive for the new variant on Jan. 13.

According to the Department of Health (DOH), Aside from the 12 in Bontoc, the others with the UK variant are two Filipinos who had returned from Lebanon, one in Benguet province and another in Calamba, Laguna. The last two had no known exposure to a COVID-19 case and had not traveled abroad.

Of the 16 new cases, three have recovered, Vergeire said.

The Quezon City resident has already tested negative but will not be sent home until his pneumonia is resolved and would continue to be monitored for about a month to ensure that he has fully recovered, Vergeire added.

Ruby Constantino, Cordillera regional director of the DOH, said one Bontoc native, who had migrated to the United Kingdom, and his family all tested negative for the coronavirus when they arrived in the country in December to spend Christmas with his parents.

The man, however, was immediately put in isolation after he tested positive later that month when he complained of heart palpitations and bowel problems.

He and his family stayed in Bontoc from Dec. 14 to Dec. 20 and also visited Sagada and other towns in Mountain Province.

Constantino said there has been no conclusive evidence that the UK resident was responsible for spreading the UK variant.

“We can be blindsided if we focus only on the UK migrant,” she said.

Other health experts said it was premature to say whether there was already community or local transmission of the more infectious variant. 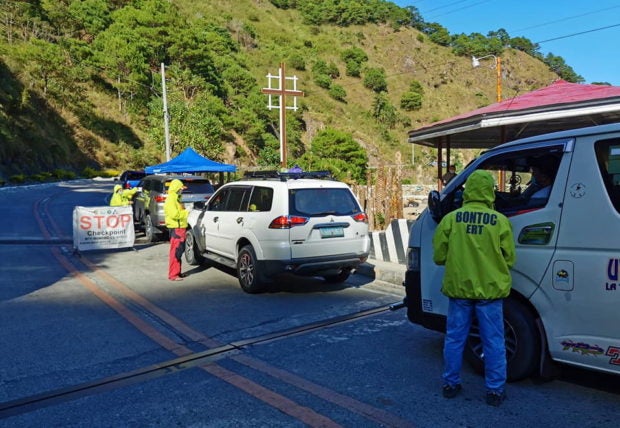 CONTROLLED ENTRY In this Jan. 11 photo, members of Bontoc town’s Municipal Inter-Agency Task Force and Bontoc Emergency Response Team inspect vehicles at a checkpoint on a road leading to this town in Mountain Province. On Friday, officials said 12 cases of the more infectious UK variant of the coronavirus had been detected in Bontoc. —BONTOC LOCAL GOVERNMENT UNIT FACEBOOK PAGE

Dr. Celia Carlos, director of the Regional Institute for Tropical Medicine, said the DOH was still investigating the points of exposure of the 16 new cases.

A sentinel site is a community under surveillance from which in-depth data are gathered and analyzed.

Dr. Edsel Salvana of the DOH Technical Advisory Group said the absence of evidence of community transmission “doesn’t mean it is not there.”

He said, however, that the country’s strong biosurveillance methods led to the discovery of the 16 cases. “These were retrospective samples, or old samples. Part of our due diligence was to look back,” he said.

The DOH is coordinating with other agencies to get the flight manifestos from the airlines used by the UK migrant and the two who returned from Lebanon for expanded contact tracing.

The Ilocos, Cagayan Valley and Central Luzon regions have offered to send contact tracers to augment Bontoc’s manpower of 20 contact tracers. The DOH is also sending a team to help.

The lockdown on Bontoc affects 44 households in Samoki village, 15 in Barangay Bontoc Ili, 11 in Barangay Caluttit, three each in the villages of Poblacion and Tocucan, and one each in Guina-ang and Alab Proper.

Odsey classified Samoki as a critical zone and placed it under an enhanced community quarantine from Jan. 18 to Jan. 31.

Odsey himself had tested positive on Jan. 15 and was admitted to the isolation facility. He is asymptomatic.

Constantino said Bontoc General Hospital’s COVID-19 facilities were 40-percent occupied. Luis Hora, she said, has a drug facility which could be converted into an isolation facility.

Other Mountain Province towns have discouraged travel to Bontoc, the province’s center of trade and commerce.

Kalinga’s Tabuk City will go into lockdown from Jan. 24 to Feb. 6. People who need to transact business in Tabuk must take rapid antigen tests and provide appropriate travel documents, according to Tabuk’s Inter-Agency Task Force.

“It would depend on the situation. We would shut down our borders for people outside the city and province coming from neighboring Mountain Province, Isabela and Cagayan, for example,” said Tabuk Mayor Darwin Estrañero.

The lockdown would allow aggressive contact tracing for people who were exposed to patients with the UK variant.

Benguet’s lone UK variant patient has been isolated in the capital town of La Trinidad.

The patient was described as a marketing executive who has not traveled outside the country, and had limited movement between Baguio City and Benguet.

The deaths and recoveries left 33,603 active cases undergoing either treatment or quarantine. Of this number, 82.6 percent are mild cases, 11 percent are asymptomatic, 3.8 percent are in critical condition, 2.2 percent have severe symptoms and 0.41 percent have moderate symptoms.