COTABATO CITY, Maguindanao, Philippines — At least 13 people were killed while seven others were wounded in a five-hour gunfight in Maguindanao that ensued after security forces tried to arrest in Sultan Kudarat town on Saturday members of a group linked to a string of killings.

Armed with arrest and search warrants, the lawmen proceeded to Talusan’s residential compound near the Limbo barangay hall where the wanted men were supposedly staying.

“Talusan’s group was involved in the series of shooting incidents targeting police and military,” Madin said. “We’re supposed to serve the search warrant but upon arrival at the area the suspects fired upon the operating troops.” 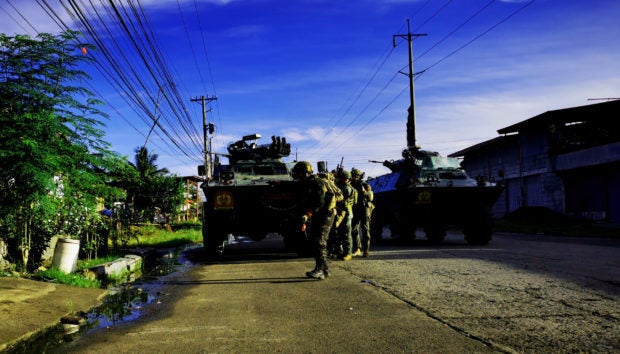 In the course of the gunfight, four more police officers were also hit along with three civilians whose houses were near the Talusan compound.

But also killed were Talusan, an acknowledged datu (tribal chief), and his 11 companions although the police could not yet determine whether the fatalities included the five other fugitives who were also subjects of the warrants of arrest.

Among those slain in the Talusan compound were two other datus, identified as Abdullah Kato Talusan and Bembi Talusan.

Madin said several firearms and ammunition were seized from the suspects, including five M-16 rifles, an M-14 rifle, a Barret sniper’s rifle, .45-caliber and 9mm pistols.

A police officer told a local radio new program that “the close-quarter battle occurred in the middle of civilian homes” and the clash caused panic among residents who were trapped in the neighborhood as the fighting raged.

Civilians who were trapped since dawn after the area was declared safe by authorities and civilians were allowed to come out of their homes.

“I thought we would die that time, but we prayed to God to spare my family,” said Reymond Blatas, a construction worker and father of three children.

“We were awakened by the series of gunfires,” said another villager Claudio Castor. “We quickly dropped for cover [as] the gun bursts were too close to our house.”