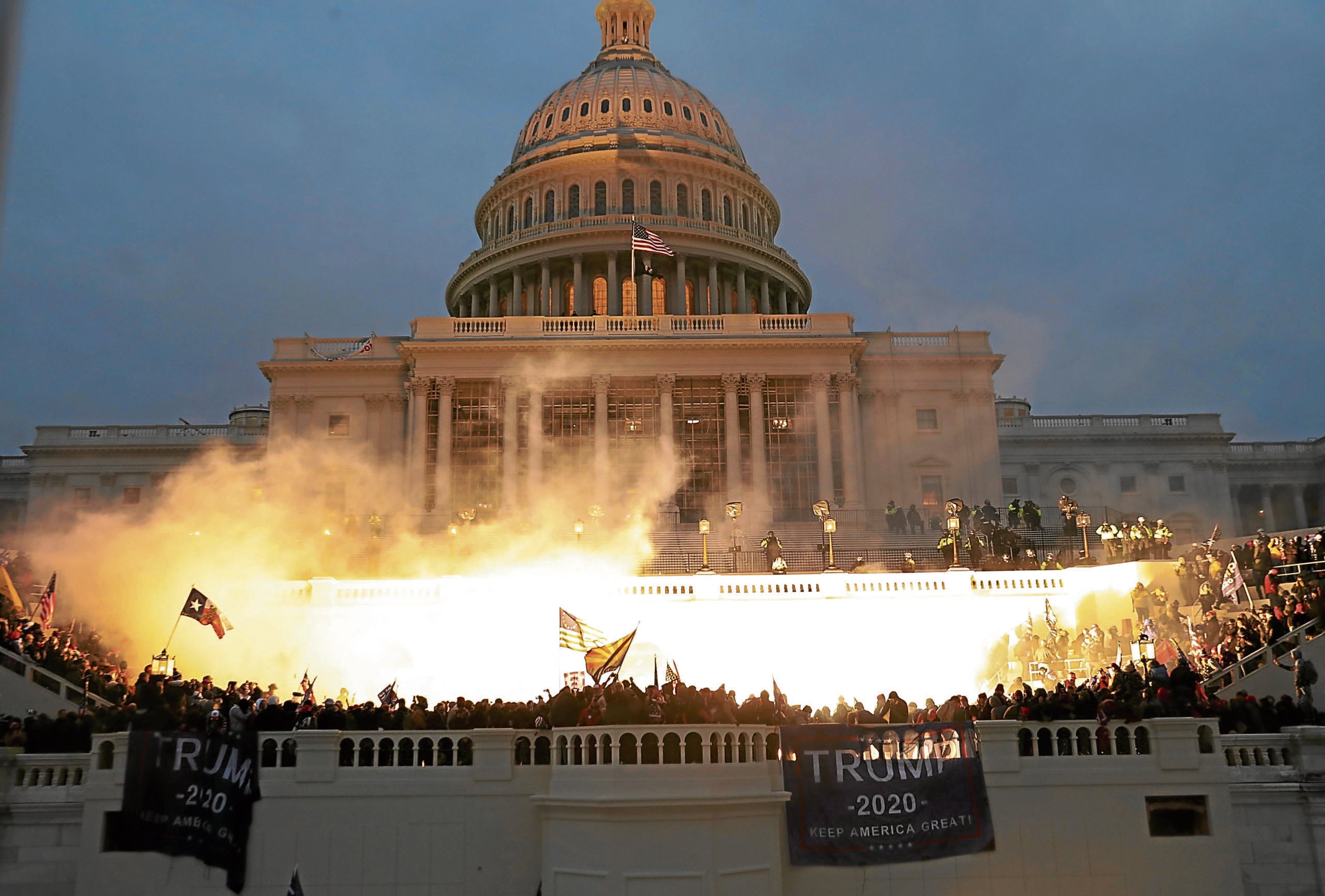 ASSAULT ON DEMOCRACY A police munition explodes as hundreds of supporters of US President Donald Trump storm the Capitol Hill building in Washington on Wednesday, in a harrowing assault on American democracy that stunned the world. The attack failed to stop the US Congress from certifying the electoral victory of President-elect Joe Biden and Vice President-elect Kamala Harris. —REUTERS

Immediately after the certification, the White House released a statement from Trump in which he pledged an “orderly transition” on Jan. 20 when Biden will be sworn into office.

Congress had resumed its work certifying Biden’s Electoral College win late on Wednesday after the chaotic scenes on Capitol Hill, with debate stretching into the early hours of Thursday.

After debate, the House of Representatives and the Senate rejected two objections to the tally and certified the final Electoral College vote with Biden receiving 306 votes and Trump 232 votes.

Vice President Mike Pence, in declaring the final vote totals behind Biden’s victory, said this “shall be deemed a sufficient declaration of the persons elected president and vice president of the United States.”

The outcome had never been in doubt, but had been interrupted by rioters—spurred by Trump—who forced their way past metal security barricades, broke windows and scaled walls to fight their way into the Capitol.

Police said four people died during the chaos—one from gunshot wounds and three from medical emergencies—and 52 people were arrested.

Some besieged the House of Representatives chamber while lawmakers were inside, banging on its doors and forcing suspension of the certification debate. Security officers piled furniture against the chamber’s door and drew their pistols before helping lawmakers and others escape.

The assault on Capitol Hill was the culmination of months of divisive and escalating rhetoric around the Nov. 3 election, with the Republican president repeatedly making false claims that the vote was rigged and urging his supporters to help him overturn his loss.

Trump persisted in making the false claims he had won even as he said the transition would be orderly.

“Even though I totally disagree with the outcome of the election, and the facts bear me out, nevertheless there will be an orderly transition on Jan. 20,” he said in a statement posted on Twitter by White House spokesperson Dan Scavino. ‘FIGHT’ Urged by US President Donald Trump to “fight,” hundreds of his supporters gather in front of the Capitol Hill building in Washington on Wednesday to thwart the certification of President-elect Joe Biden’s electoral victory by the US Congress. —REUTERS

Wednesday’s chaos unfolded after Trump—who before the election refused to commit to a peaceful transfer of power if he lost—addressed thousands of supporters near the White House and told them to march on the Capitol to express their anger at the voting process.

He told his supporters to pressure their elected officials to reject the results, urging them “to fight.”

Some prominent Republicans in Congress strongly criticized Trump, putting the blame for the day’s violence squarely on his shoulders.

A source familiar with the situation said there have been discussions among some Cabinet members and Trump allies about invoking the 25th Amendment, which would allow a majority of the Cabinet to declare Trump unable to perform his duties, making Pence the acting president. A second source familiar with the effort doubted it would go anywhere with Trump having just two more weeks in office.

The shock of the assault on the Capitol seemed to soften the resolve of some Republicans who had supported Trump’s efforts to convince Americans of his baseless claims of fraud.

Republican Sen. Lindsey Graham, one of Trump’s staunchest allies in Congress, rejected an effort by his fellow Republicans to object to election results in hopes of setting up a commission to investigate Trump’s unsubstantiated allegations of election fraud.

“All I can say is count me out. Enough is enough,” Graham said on the floor of the Senate. “Joe Biden and Kamala Harris are lawfully elected and will become the president and the vice president of the United States on Jan. 20.”

National Guard troops, FBI agents and US Secret Service were deployed to help overwhelmed Capitol police. Guard troops and police pushed protesters away from the Capitol after the curfew took effect.

It was the most damaging attack on the iconic building since the British army burned it in 1814, according to the US Capitol Historical Society.

Biden, a Democrat who defeated the Republican president in the November election and is due to take office on Jan. 20, said the activity of the protesters “borders on sedition.”

In a video posted to Twitter while the rioters roamed the Capitol, Trump repeated his false claims about election fraud but urged the protesters to leave.

“You have to go home now, we have to have peace,” he said, adding: “We love you. You’re very special.”

Twitter Inc. later restricted users from retweeting Trump’s video, and Facebook Inc. took it down entirely, citing the risk of violence. Twitter said later it had locked the account of Trump for 12 hours over “repeated and severe violations” of the social media platform’s “civic integrity” rules and threatened permanent suspension.

White House Deputy National Adviser Matt Pottinger resigned in response to the president’s reaction to the mob of protesters who breached the Capitol.

Pottinger, a leading figure in the development of Trump’s China policy, resigned on Wednesday afternoon, joining a number of officials who were leaving the administration of Trump in the wake of violence on Capitol Hill.

The mayhem stunned world leaders. “Trump and his supporters must accept the decision of American voters at last and stop trampling on democracy,” German Foreign Minister Heiko Maas said.

British Prime Minister Boris Johnson in a tweet called the events in the US Congress a “disgrace,” saying the United States stood for democracy around the world and that it was “vital” now that there should be a peaceful and orderly transfer of power.

“What happened today in Washington, D.C., is not American, definitely,” French President Emmanuel Macron said in a video message on Twitter.

“Obviously we’re concerned and we’re following the situation minute by minute,” Trudeau told the News 1130 Vancouver radio station. “I think the American democratic institutions are strong, and hopefully everything will return to normal shortly.”

“We condemn these acts of violence and look forward to a peaceful transfer of government to the newly elected administration in the great American democratic tradition,” he posted on Twitter.