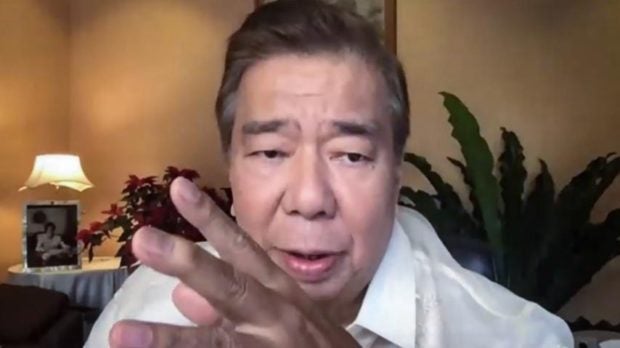 In a radio interview, Drilon acknowledged that Duterte has the power to invoke “executive privilege” to prevent Durante from appearing before Congress in light of the recent PSG controversy.

Drilon explained that executive privilege is a recognized power of the President under Executive Order 464, which has been affirmed by the Supreme Court.

(According to the Supreme Court, that is valid but based on reason about the subject of inquiry, it is not, because you are a Cabinet member or you are from whatever agency that doesn’t mean you are already exempted. What’s important, the ground of invocation of the executive privilege. There should be basis, not just arbitrary.)

Drilon, however, pointed out that an executive privilege cannot stop Congress from performing its constitutionally mandated duty to investigate, in aid of legislation, issues such as the entry of unregistered COVID-19 vaccines in the country.

The senator said the Senate can instead invite other sources of information, other than the PSG.

Asked if the Senate will no longer invite Durante in the Senate hearing, Drilon said: “Hindi na kailangan [No longer needed].”

Drilon repeated this sentiment in a separate statement, saying “[t]here is no preventing Congress from eliciting information in aid of legislation from other resource persons”, especially with recent reports that 100,000 Philippine Offshore Gaming Operator (Pogo) workers were inoculated in the country.

“The Senate must exercise its mandate to look deeply into the issue in order to plug the loopholes in the law granting authority to the Food and Drugs Administration,” Drilon said in the statement.

“The Senate should continue with the hearing, especially in the light of the revelation that 100,000 Pogo workers were inoculated in the country. That is illegal. In aid of legislation, the Senate must elicit information from other sources on how to strengthen the FDA and the Bureau of Customs to prevent similar episodes in the future,” he added.

Drilon said that Executive Order 464 was issued by then former President Gloria Macapagal-Arroyo in 2005, which required all heads of departments of the Executive Branch to secure the consent of the President prior to appearing before any congressional probe.

However, Drilon said such power is limited to certain types of information such as Presidential conversations, correspondences, and discussions in closed-door Cabinet meetings.

Drilon said the Supreme Court also said that information on military and diplomatic secrets and those affecting national security, and information on investigations of crimes by law enforcement agencies before the prosecution of the accused were exempted from the right to information.

Any other issue outside the topic—including the PSG controversy—may be tackled in a separate hearing, said Sotto.

The ebb of Dutertismo