CHR launches investigation on deaths of 9 IP villagers in Panay 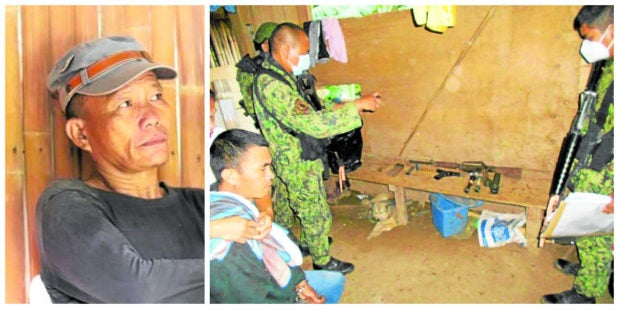 TUMANDUK KILLINGS A police officer (right photo) takes a picture of firearms allegedly
seized in one of the houses they raided on Dec. 30 in Tapaz town, Capiz province, where nine
members of the Tumandok tribe were killed when they allegedly fought against officers serving
a search warrant. One of those killed was Roy Giganto (left) shown in this file photo, who is chair
of Tamunduk, an organization opposing a damproject that would displace them from their ancestral
land on Panay Island. —PHOTOS FROM KILUSANGMAGBUBUKID NG PILIPINAS/POLICE REGIONAL OFFICE 6

MANILA, Philippines — The Commission on Human Rights (CHR) has launched an investigation into the deaths of nine indigenous peoples (IPs) from the remote villages of Panay Island during a joint police and military operation on December 30.

In a statement on Tuesday, CHR Commissioner Gwendolyn Pimentel-Gana said it is “with utmost concern” that the CHR launched a motu prop investigation on the incident.

“To this end, the Commission, through CHR Region VI, is already moving to gather documents and affidavits to resolve if human rights violations were committed and ultimately call for accountability for all those found to have caused such an affront to human rights and dignity,” she said.

The CHR noted that several other IP community members were also arrested over same allegations of illegal possession of firearms, ammunition, and explosives.

Those killed and arrested were reportedly members of Tumanduk nga Mangunguma nga Nagapangapin sang Duta kag Kabuhi (Tumanduk), an alliance of 17 indigenous peoples communities in Tapaz and Jamindan towns in Capiz and Calinog in Iloilo province.

According to Pimentel-Gana, the group was said to have long campaigned against the construction of the Jalaur Dam in Panay Island, which she said would adversely affect their ancestral lands.

Prior to the Dec. 30 police and military operation, the group was also being tagged as supporters and members of the NPA, the armed wing of the Communist Party of the Philippines.

“The Commission at this point is equally interested to pursue the truth behind these deaths and arrests as there have been opposing narratives on how those who died resisted and some asserting that the evidence found were said to have been planted,” Pimentel-Gana said.

“At the same time, we equally stress and remind law enforcers to strictly observe set protocols for serving warrants. All officers of the law are expected to respect the human rights and dignity of suspect/s during police operations. The same stern reminder is echoed in the Philippine National Police operational guidelines and handbook,” she added.

However, she clarified that this does not provide that the lives of law enforcers should be put at risk, but rather “a reminder that the use of force should always be limited to what is reasonable and necessary only to subdue imminent danger and overcome resistance — not result in deaths.”