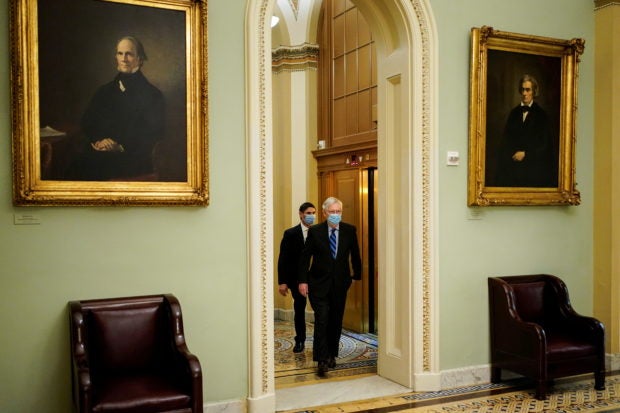 WASHINGTON  – President Donald Trump’s fellow Republicans in the U.S. Senate on Friday overrode his veto for the first time in his nearly four years in office, pushing through a defense policy bill against his objections just weeks before he leaves office.

The session also appeared to end for now a push by Democrats to increase COVID-19 relief checks from $600 to $2,000 sought by Trump. Senator Bernie Sanders again joined Democrats in a bid to force a vote on higher payments, only to be blocked by Republicans.

Republican lawmakers have largely stood by the president during his turbulent White House term.

Since losing his re-election bid in November, however, Trump has lashed out at them for not fully backing his unsupported claims of voter fraud, for rejecting his demand for bigger COVID-19 relief checks, and for moving to override his veto.

The vote in the Republican-led Senate followed a similar override vote in the Democratic-controlled House of Representatives on Monday. A president has the power to veto a bill passed by Congress, but lawmakers can uphold the bill if two-thirds of both houses vote to override the veto.

The $740 billion National Defense Authorization Act (NDAA) determines everything from how many ships are bought to soldiers’ pay and how to address geopolitical threats.

Trump refused to sign it into law because it did not repeal certain legal protections for social media platforms and included a provision stripping the names of Confederate generals from military bases.

“We’ve passed this legislation 59 years in a row. And one way or another, we’re going to complete the 60th annual NDAA and pass it into law before this Congress concludes on Sunday,” Senate Republican Leader Mitch McConnell had said ahead of the vote.

Pelosi accused the president of using his final weeks in office “to sow chaos” and said Congress called on him to “end his desperate and dangerous sabotage.”

Seven Republicans joined five Democrats and Sanders, an independent who caucuses with Democrats, in opposing the override.

Until Friday’s vote, Trump had been on track to be the first president since Lyndon Johnson with no vetoes overridden, according to the American Presidency Project at the University of California Santa Barbara.

The vote could have implications for two U.S. Senate runoff elections in Georgia on Tuesday that will decide control of the chamber under President-elect Joe Biden, who takes office on Jan. 20. The senators facing a runoff, Republicans David Perdue and Kelly Loeffler, strongly back both Trump and the military.

But neither Perdue nor Loeffler voted on Friday. Neither did another staunch Trump ally, Senator Lindsey Graham. Perdue entered quarantine this week after contact with someone who tested positive for COVID-19. Spokesmen for Loeffler and Graham did not respond to requests seeking comment.

After Friday’s vote, the Senate adjourned until Sunday, when it will meet for a 15-minute pro forma session before reconvening at Noon for the swearing in of the new Congress.

Trump, who returned to Washington on Thursday from his private club in Florida, has ramped up pressure on fellow Republicans and slammed party leadership for failing to do his bidding on the defense and COVID-19 relief measures and for not more fully joining his fight to overturn the election results.

As votes were being counted indicating Trump had lost the battle over the bill, the president took to Twitter to tout a protest rally being planned in Washington on Wednesday, the day the new Congress officially tallies the Electoral College votes certifying Democrat Biden’s presidential victory.

Some Trump allies in Congress have said they plan to object on Trump’s behalf, including Republican Senator Josh Hawley of Missouri who expects to be joined by as many as 140 House Republicans. The objections are expected to be dismissed by the vast majority of lawmakers.

“This is my one opportunity of this process to stand and be heard,” Hawley told reporters on Friday. “And to speak up on behalf of my constituents.”

But Hawley acknowledged that he is still undecided about how many state election results will be the targets of his objections: “I haven’t worked out the mechanisms, correct.”

Republican Senator Ben Sasse blasted the move as an effort by ambitious politicians to tap into Trump’s populist base, saying in a statement on Facebook on Wednesday: “Adults don’t point a loaded gun at the heart of legitimate self-government.”

Later on Friday, Trump tweeted about the Senate’s refusal to take up his call for more COVID-19 relief aid and to lift legal protections for social media platforms.

“Our Republican Senate just missed the opportunity to get rid of Section 230, which gives unlimited power to Big Tech companies. Pathetic!!! Now they want to give people ravaged by the China Virus $600, rather than the $2000 which they so desperately need. Not fair, or smart!” he wrote.