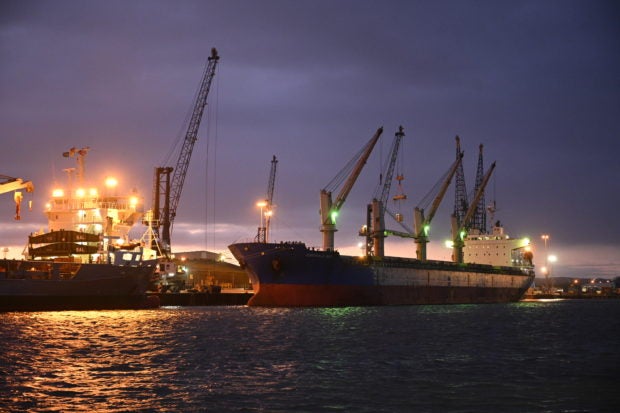 Ships are moored in the harbour at sunset in Hartlepool, north-east England, on January 1, 2021, where 69.6% of voters in the 2016 “Brexit” referendum opted to leave the EU (European Union). – Britain on Friday began a new year and life outside the European Union’s single market, with the first trucks crossing the Channel by ferry and rail reporting largely plain sailing despite new customs rules. (Photo by Oli SCARFF / AFP)

LONDON – Britain on Friday began a new year and life outside the European Union’s single market, with the first trucks crossing the Channel by ferry and rail largely reporting few difficulties despite new customs rules.

Brexit, an all-consuming issue in Britain since it voted in 2016 to quit the bloc, became reality an hour before midnight after nearly five decades of integration with Europe.

Prime Minister Boris Johnson was bullishly optimistic, writing in the Daily Telegraph that Brexit presented “opportunities unknown to modern memory”, even as the country battles a new wave of coronavirus infections.

Johnson also tweeted his ambitions for a “Global Britain”, as the country took over the presidency of the G7 nations on Friday and prepares to host the COP 26 climate summit in November.

“I look forward to welcoming our friends and allies as we beat Covid and build back better from the pandemic,” he wrote.

In practical terms, free movement of over 500 million people between Britain and the 27 EU states ended with the New Year.

More rigorous customs checks returned for the first time in decades, despite the hard-fought brokering of a deal with the EU allowing for tariff- and quota-free trade.

Passengers stepping off the Eurostar train from London at the Gare du Nord found new customs checks awaiting them.

Ferry group Stena Line said six freight loads bound for EU-member Ireland were turned away at the port of Holyhead in Wales for not having the correct paperwork.

But the approach to Dover in southeast England, where ferries to and from northern France dock, was quiet.

“Everything was normal,” said Romanian Alexandru Mareci, who was among the first truck drivers to enter Britain after the rule changes.

“Of course, how many people do you know who work on the first day of the New Year? We don’t know how it will be in the future.”

Scores of heavy goods vehicles also passed through the Channel Tunnel connecting Britain and France by rail “without any problem” early Friday, its operator said.

However, the British government, which is implementing a phased introduction of checks, expects next week to be the true test, once the quiet holiday period is over.

New Year’s Day newspapers reflected the historic but still deeply divisive change, which will have repercussions for generations to come.

The front-page photograph on the pro-Brexit Daily Express showed the White Cliffs of Dover — an enduring symbol of Britishness — with “Freedom” written on a Union flag.

But whether the United Kingdom will even stay united is exercising minds as the pro-EU Scottish National Party steps up calls for a second referendum on independence.

The end to EU rules was a triumph for veteran Brexiteers such as populist politician Nigel Farage, a prominent voice in the 2016 referendum campaign to leave.

He tweeted: “25 years ago they all laughed at me. Well, they’re not laughing now.”

In the city of Gateshead in northern England, where the majority voted for Brexit, Allessio Suave, a 37-year-old retail manager, was equally upbeat.

“I think it’s a great opportunity for the UK now to stand alone and to really build some business across the world,” he said.

In any case, opinion polls indicate that most Britons want to move on and are far more worried about the worsening coronavirus pandemic, which has left more than 73,500 dead in Britain alone.

Practical changes include how long Britons can visit their holiday homes on the continent, how to travel with pets, and an end to British involvement in an EU student programme.

Holidaymakers and business travellers used to seamless EU travel could face delays, although fears Britons will have to get international permits to drive in Europe were averted by a separate accord.

Another last-minute deal between London and Madrid allowed for the tiny British territory of Gibraltar to become part of Europe’s passport-free zone, to keep movement fluid on its border with Spain.

In Spain’s Andalusisa, British expats staged an ironic celebration with traditional bangers and mash and songs including The Communards’ “Don’t leave me this way”.

“If we don’t celebrate in some way, we would just be crying,” said Elaine Gilfillan, a teacher from Scotland who has lived in Spain for nearly two decades.

British fishermen are disgruntled at a compromise in the free trade agreement to allow continued access for EU boats in British waters.

The key financial services sector also faces an anxious wait to learn on what basis it can keep dealing with Europe, after being largely omitted from the trade deal along with services in general, which account for 80 percent of Britain’s economy.

In Northern Ireland, the border with Ireland will be closely watched to ensure movement is unrestricted — key to a 1998 peace deal that ended 30 years of violence over British rule.