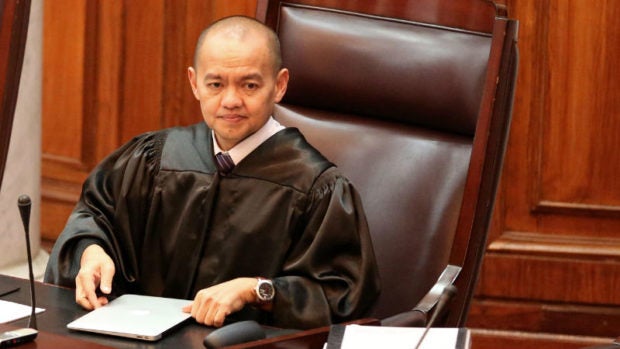 MANILA, Philippines—Law deans and professors from across the Philippines called for dismissal of the impeachment case filed against Supreme Court Associate Marvic Leonen as they described the complaint “unsubstantiated and groundless.”

The group expressed their support for Leonen, himself a former dean of the University of the Philippine College of Law, and said that the case was an attempt to remove a Supreme Court justice who, the group said, was against the “ambitions of a privileged few.”

“The impeachment complaint filed against him last December 7 2020, with its unsubstantiated and groundless allegations, should be dismissed for utter lack of merit,” said the group in a statement Saturday.

“Beyond the complaint unjustly leveled against a decent public servant, the impeachment is a palpable assault on judicial independence, in the attempt to remove an Associate Justice for standing as an obstacle to the ambitions of a privileged few.”

Edwin Cordevilla, Secretary General of the Filipino League of Advocates for Good Government, filed the impeachment case with Atty. Larry Gadon assisting him and Ilocos Norte Representative Angelo Barba endorsing it in the House of Representatives.

Cordevilla argued that Leonen allegedly lacked integrity in his supposed failure to file his Statement of Assets and Liabilities, a notion he stuck with as he cited a newspaper column.

The complainant also accused Leonen of being in favor of the Liberal Party, which has been the target of the current administration for anything under the sun, with the Supreme Court justice allegedly always voting in favor of the political group.

“Justice Marvic Leonen is a respected and distinguished colleague in the legal academe,” said the group of educators. “His stellar academic credentials, extensive record of service to the cause of the underserved, underprivileged, and marginalized, his experience in alternative legal advocacy litigation, as well as his commitment to the study and teaching of the law validates his place on the high bench.

The group also questioned the timing of the case as it was filed while the Philippines is still under the grips of the COVID-19 pandemic and is only recovering from Super Typhoon Rolly and Typhoon Ulysses.

“The impeachment complaint against Justice Leonen could not have been filed at a more inopportune moment, against the backdrop of overlapping national emergencies,” said the group. “It presents an unnecessary distraction from the more urgent and persistent caliber of intellectual discourse.”