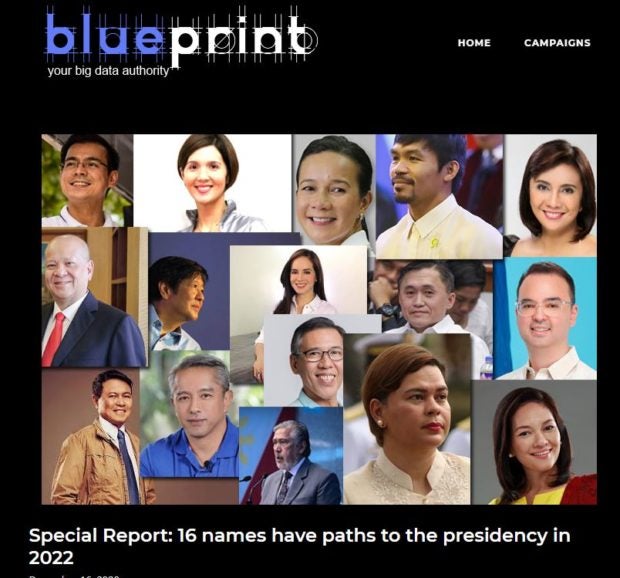 MANILA, Philippines — Vice President Leni Robredo, Senator Christopher “Bong” Go and businessman Ramon Ang are some of the big names Filipinos are eyeing to run as President Rodrigo Duterte’s successor in the 2022 national polls, according to a study released by a research firm.

Special Report: 16 names have paths to the presidency in 2022

BluePrint.PH CEO Eero Brillantes said that the names were based on sentiment analysis on Facebook.

Such sentiment analysis, Brillantes added, was based on the social media data extracted from June 1 to Nov. 30 of this year, scanning a total of 344,761,479 data points or Facebook engagement such as likes, shares, reactions and comments.

“If we go by our big data metrics, about 16 names are frequently being mentioned on social media, particularly Facebook, as potential presidential candidates,” Brillantes said.

“All have paths to the presidency. Social media networking activities alone through Facebook can generate 22 percent to 35 percent of the votes in 2022,” he added.

According to Brillantes, there are four components to a serious campaign, namely: ground game, the air war through mainstream media, network engineering (social media), and big data for decision support.

All 16 names have one of the components, but not all of them possess the four  components, the CEO added.

“Social media will be a major battleground at 22 to 35 percent potential votes,” he said, adding that the ground game and mainstream media through advertising and public relations will account for the 65 percent to 78 percent of vote generational potential.

The component “big data for decision support” will be crucial in determining the right messaging and priority spending across many segments of the electorate, he said.

BluePrint.PH’s study showed that personalities with the highest media coverage on traditional media and posted on Facebook are Robredo, followed by Pacquiao and Moreno.

“Meanwhile, Rep. Lucy Torres-Gomez, Ramon Ang, Jonvic Remulla, Risa Hontiveros have ranked highest in the list of candidates with most growth potential on social media. These personalities have a small number of followers and influencers but indicate good potential,” BluePrint.PH added.