BJMP insists: We acted within bounds of law on Nasino’s case, furlough 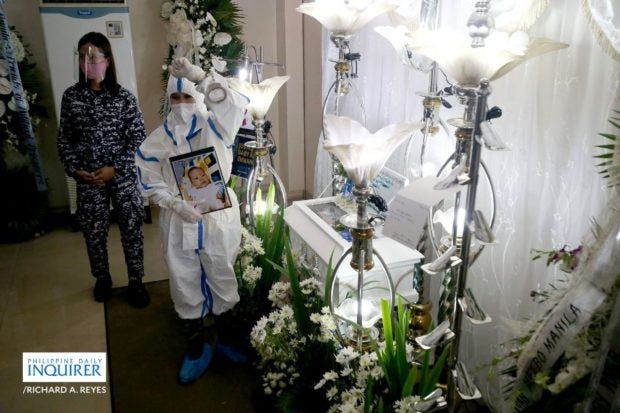 Detained activist Reina Mae Nasino visits the wake of her 3-month-old daughter River at La Funeraria Rey in Pandacan, Manila, on Wednesday, Oct. 14, 2020. The Manila Regional Trial Court granted Nasino a furlough to see her baby for the last time, however, reducing her original request of three straight days to only two days, Oct. 14 and 16, from 1 p.m. to 4 p.m. each day. (File photo  by RICHARD A. REYES / Philippine Daily Inquirer)

MANILA, Philippines — The Bureau of Jail Management and Penology (BJMP) insists that it acted according to law on the case of political prisoner Reina Mae Nasino, including the limits imposed on her furlough.

That was the reaction of the BJMP on learning that Nasino had filed various criminal and administrative complaints against it and some officers of the Philippine National Police (PNP).

“ We have not yet received a copy of the complaint,” Chief Insp. Xavier Solda, BJMP spokesperson, told reporters on Wednesday.

“The BJMP maintains that we have acted within the bounds of the law and the rules and regulations of the agency,” he added.

Earlier, Nasino’s mother, Marites Asis, filed a complaint, with the help of some members of the National Union of People’s Lawyers (NUPL), over the abuses supposedly endured by Nasino and her late baby daughter, River Nasino.

Specifically, the 69-page complaint, which was submitted to the Office of the Ombudsman, was for alleged violations of the Anti-Torture Act and 0f the rights of inmates.

Among the other respondents are the chief of the Manila Police District (MPD), Brig. Gen. Rolando Miranda; the MPD Station 10 commander, Lt. Col. Levi Hope Basilio; and other PNP and BJMP officers who were at the wake of River.

They are also facing administrative complaints of grave misconduct, conduct prejudicial to the best interest of the service, and grave abuse of authority.

Nasino was arrested in November 2019 as part of a series of raids on the offices of activist organizations in Metro Manila and on Negros Island.  She was charged with illegal possession of firearms and explosives.

But while under detention, she discovered that she was pregnant. Despite this, she was not allowed to let her newborn daughter stay with her either inside or outside the detention facility, amid the threat of the COVID-19 pandemic.

When River was brought to the intensive care unit of the Philippine General Hospital, Nasino’s lawyers made a last attempt to reunite mother and child as the infant’s health had quickly deteriorated.  But it was not acted upon by the court.

After River’s death, her lawyers sought a furlough to allow Nasino to grieve with her relatives. It was granted but was later reduced to a few hours of visit.

River’s burial also attracted controversy as it was allegedly hijacked by police officers sent supposedly to secure the procession, leaving mourners including Asis behind.

Several groups believe that these actions of the government were tantamount to abusing the rights of a prisoner.

Aside from the criminal and administrative cases, Nasino also filed charges for supposed violations of the Expanded Breastfeeding Promotion Act of 2009 against Iral and Monteron, accusing them of denying River access to breastmilk by not allowing them to use an adequate nursing facility.