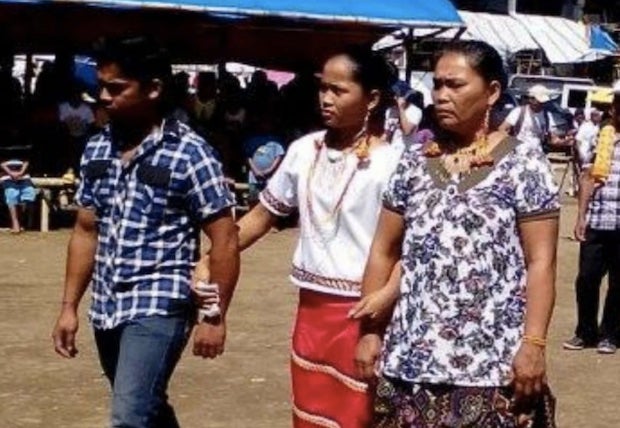 Jervilyn Cullamat (center), the NPA medic slain in a firefight with soldiers on Nov. 28, 2020, is shown in this picture taken on March 17, 2016, during the graduation and moving up ceremony at the Alternative Learning Center for Agriculture and Development in the Provincial Sports Complex in Tandag City, Surigao del Sur. She is 18 and accompanied by her mother, Bayan Muna Rep. Eufemia Cullamat (right), and her brother. (Photo courtesy of Bayan Muna)

MANILA, Philippines — The Commission on Human Rights (CHR) assured on Wednesday the family of Bayan Muna Rep. Eufemia Cullamat that it had started investigating the alleged desecration of her daughter Jevilyn’s remains by some soldiers.

The lawmaker had complained to the CHR that soldiers posed for photographs with the body of her 22-year-old daughter like a “war trophy” after she was killed last Saturday, Nov. 28, in a clash in Surigao del Sur between the New People’s Army (NPA), in which she was a medic, and an Army Special Forces team.

“The CHR Caraga Regional Office has already launched a probe on the case of Cullamat. We promise to work closely with the family of the victim and the authorities to shed light on the incident,” Jacqueline De Guia, CHR spokesman, said in a statement on Wednesday.

“Faithful to its mandate, the CHR is always open to any party who seeks aid in pursuing justice and accountability for human rights violations perpetrated by both state and non-state actors,” she added.

After news broke of the younger Cullamat’s death in a clash with a team from the Philippine Army’s 3rd Special Forces Battalion (3SFBn) last Nov. 28, the Bayan Muna lawmaker condemned the use of her daughter’s remains in a photo-op done by the military.

Several activists took offense at the inclusion of Cullamat’s body in the photo, calling it a “war crime.”

The CHR also previously said that it could see no reason why a photo with the dead NPA member was even necessary.

On Monday, two days after the clash, Defense Secretary Delfin Lorenzana ordered a review of the protocol in handling the remains of slain rebels after Cullamat’s fellow Makabayan bloc lawmakers at the House of Representatives c0mplained that Jevilyn’s remains were used as a war trophy.

Meanwhile, the CHR said that it was also probing the recent deaths of former peace consultants Eugenia Magpantay and Agaton Topacio. Both killed in an alleged firefight with officers of the Criminal Investigation and Detection Group of the Philippine National Police.

“We also note the recent request for investigation of the family of former National Democratic Front of the Philippines consultants Eugenia Magpantay and Agaton Topacio who were recently killed in a police encounter in Angono, Rizal,” De Guia said.