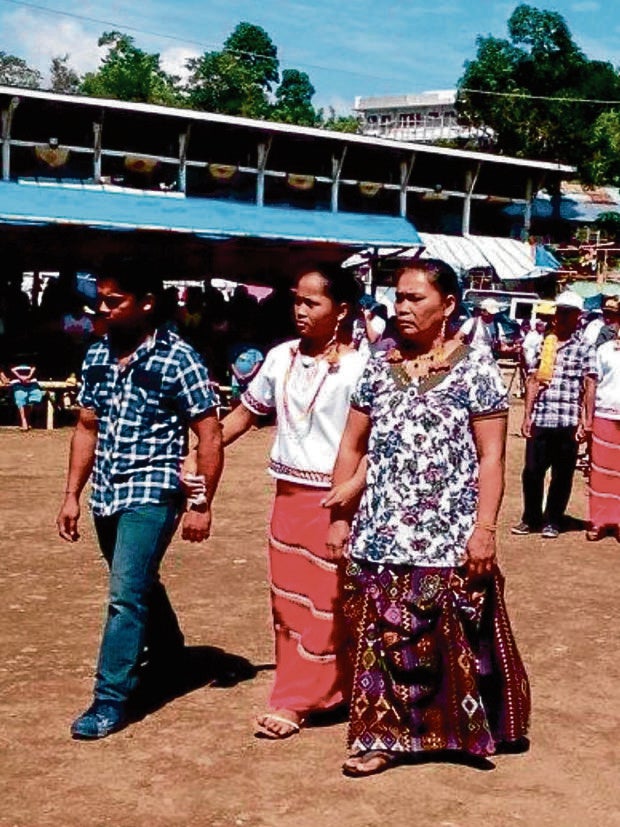 GRADUATION DAY Jevilyn Cullamat, the communist rebel medic slain in a firefight with soldiers on Saturday, is shown in this picture taken on March 17, 2016, during the graduation and moving up ceremony at the Alternative Learning Center for Agriculture and Development in the Provincial Sports Complex in Tandag City, Surigao del Sur. She is 18 and accompanied by her mother, Bayan Muna Rep. Eufemia Cullamat (right), and her brother. —PHOTO COURTESY OF BAYAN MUNA

MANILA, Philippines — Bayan Muna Rep. Eufemia Cullamat on Tuesday filed a complaint in the Commission on Human Rights (CHR) alleging that the military desecrated the body of her daughter, Jevilyn, who was killed in a clash last week between soldiers and the communist New People’s Army (NPA).

“They displayed mercilessly and without respect her remains like a trophy won by the soldiers who posed in the background,” Cullamat said in a letter to CHR Chair Chito Gascon.

She said the photos of her daughter’s body were now being used for “black propaganda” and continuous Red-¬tagging against her family and the Makabayan bloc in the House of Representatives.

“I cannot accept this and I strongly condemn this,” she said, calling soldiers’ photograph near her daughter’s body “vultures.”

Cullamat said the military’s action violated not only her rights as a mother but also the International Humanitarian Law.

“I am praying and calling that your commission formally investigate my complaint,” she told Gascon.

Defense Secretary Delfin Lorenzana on Monday ordered a review of guidelines in handling the bodies of slain rebels following the outrage that greeted the release of the photos.

Maj. Gen. Edgard Arevalo, spokesperson for the Armed Forces of the Philippines, “vehemently denied” that Jevilyn’s body was used as a war trophy.

“The matter is already being investigated. And the one who caused that faces sanctions,” he said.

The 22-year-old Jevilyn, Cullamat’s youngest child, was said to be a medic in the NPA unit encountered by members of the Army’s 3rd Special Forces “Arrowhead” Battalion on Saturday afternoon in Surigao del Sur’s Marihatag town.

Not evidence of links to NPA

In a video clip presented by Bayan Muna during Tuesday’s Senate hearing on Red-tagging, a tearful Cullamat said her daughter’s death should not be used as evidence against her party list group.

“Let me be clear. Bayan Muna has nothing to do with my daughter’s decision [to join the NPA],” she said. “That was her personal decision. Not mine, and especially not Bayan Muna’s.”

She said she respected her daughter’s decision to join the armed struggle, adding that Jevilyn was not a blind follower.

“Do you want Bayan Muna to condemn Jevilyn? No. Try to first understand the everyday struggles of the lumad,” Cullamat said. “Stop your harassment. Respect the dead, my grief, our mourning. I hope this chamber will listen to my request as a mother, a mother who will never be able to restore the life of her child.”

The Cullamats belong to the Manobo indigenous community in the province.

“Elements of the military whose faces have been blurred in a photograph triumphantly preening over the obviously posed lifeless body of the young rebel with a cause whom they have slain in an encounter are the terrorists of the oppressed and beleaguered indigenous peoples of Mindanao, like the long-suffering Lumad,” Lagman said in a statement.

He said the “propaganda photo” of the young Cullamat cradling a firearm “speaks a thousand words of the terrorism and depravity of state agents, and the culpable neglect and discrimination of government, which impel people to resist the errant and abusive policies of the authorities.”

“Also evidently planted was the array of assorted firearms reportedly recovered from the encounter when no one else was killed except Cullamat,” he said.

“Our thoughts and prayers are with you and your entire family,” Sotto said.

“May your beautiful memories sustain and bring comfort to you during this difficult time, on behalf of the Senate.”

Sen. Panfilo Lacson, a former national police chief who graduated from the Philippine Military Academy, said he also sympathized with Cullamat’s family over their loss.

“As a caveat, as far as we are concerned, a dead NPA rebel or a dead soldier is only as bad and tragic as a dead Filipino,” said Lacson, the chair of the Senate defense and security panel.

“We see no difference at all, except, probably, the cause that they fought and died for,” he said.

National Security Adviser Hermogenes Esperon Jr. on Tuesday said he hoped that the Makabayan bloc would condemn the NPA following the death of Cullamat’s daughter.

Esperon said the “upsetting circumstance” of Jevilyn’s death should be seen “as it truly is: the deception and exploitation of our youth and vulnerable communities.”

Cullamat had considered her daughter a “martyr,” but Esperon rejected that.

“I refuse to call her as such. Jevilyn was not a martyr,” he said in a statement.

“She was deceived into sacrificing her life for a cause lacking legitimacy and noble purpose. She was a victim of a manipulative organization that has taken advantage of her from the moment she was radicalized until her recruitment into the armed struggle,” he said.