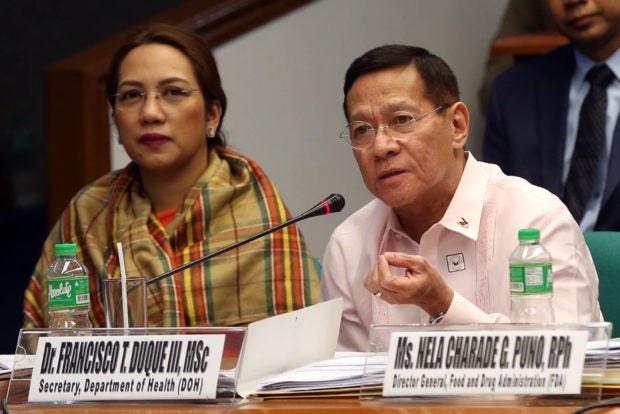 MANILA, Philippines — Several incumbent and former officials of the Department of Health (DOH), including incumbent Secretary Francisco Duque III and former Secretary Janette Garin, are facing a fresh wave of cases due to the controversial Dengvaxia vaccine.

According to Public Attorney’s Office (PAO) chief Persida Acosta, 99 relatives of those who died of severe dengue fever supposedly because they had been vaccinated with Dengvaxia, a vaccine manufactured by Sanofi Pasteur, filed four cases against Duque, Garin, and 39 other officials:

PAO will assist the complainants in the legal proceedings

This is not the first time that PAO assisted people who supposedly suffered negative effects receiving the Dengvaxia vaccine, which was recalled by Sanofi Pasteur in 2017.

Despite having no allocated budget for building up the cases, Acosta said that the complaints were filed because public lawyers and forensic experts were employed by the government — thus receiving salaries making their services free of any additional charge.

“Our special public attorneys and forensic doctors have mandated salaries and allowances from the allotment of Personnel Services per GAA 2020. The forensic examinations are free of charge […] free legal services and case buildup of PAO are part and parcel of our office mandate in all cases being handled,” Acosta told reporters.

“The families of the victims have their own donors for the burial, and funeral/morgue expenses.  What was removed by  from 2020 President’s NEP is supposed to be P19.5 M for new equipments. The PAO legal services and its Forensic Laboratory personnel can exist and operate even without said equipments,” she added.

The national anti-dengue vaccination program, worth P3 billion, started under the administration of President Benigno Aquino III’  The government, through DOH, procured Dengvaxia from Sanofi Pasteur through its local distributor Zuellig Pharma.

According to the DOH, more than 830,000 individuals, including children, were vaccinated under the program.

However, things turned awry when Sanofi Pasteur issued a statement saying the vaccine might cause increased risk of hospitalization for dengue and severe dengue in individuals who had not been previously infected by the dengue virus.

After the vaccine was pulled out from the market in December 2017, PAO conducted its own investigation on deaths blamed on Dengvaxia. PAO said all bodies they examined had similar signs of internal bleeding, cranial bleeding, and enlarged organs.

An inquiry by both chambers of Congress found former government officials, including Aquino possibly liable for negligence for purchasing Dengvaxia.

But several sectors believe that the Dengvaxia issue was a political one, supposedly meant to tarnish the past administration’s projects.

The allegedly bloated stories about Dengvaxia were also blamed to have caused a scare for vaccines, which led to a rise in curable diseases like measles and polio.

WHAT WENT BEFORE: Dengue vaccine