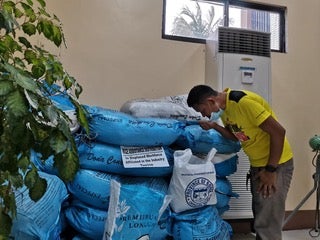 A man smells the weevil-infested smelly rice, which were given by the provincial government of Bohol to displaced tourism workers in Loboc town, Bohol. (Leo Udtohan/Inquirer Visayas)

TAGBILARAN CITY –– Some displaced tourism workers in Loboc town in Bohol opted not to claim their rice assistance from the provincial government after they found out that these smelled moldy and infested with “bukbok” (weevil).

At least 180 packs of rice, which contained 10 kilos each, were left inside the Loboc Tourism Building since no beneficiaries came to get their subsidy.

Loboc Mayor Leon Calipusan said at least 1,076 workers in the town’s tourism industry, who were affected by the coronavirus disease pandemic, were the supposed beneficiaries.

Loboc, known as the music capital of Bohol, is the home of the world-renowned Loboc Children’s Choir and the Loboc River Cruise, which employed hundreds of employees.

Jason (who requested not to reveal his family name), was happy when told that he would receive 10 kilos of rice from the Capitol.

“(But) the moment I opened the plastic containing the rice, I immediately noticed the smell. We did not eat the rice. We just threw it away,” said Jason, who worked in one of the floating restaurants in Loboc.

Carmelita Maita Tecson, provincial social welfare and development officer, said the rice packs distributed last Oct. 16 in Loboc were new, had no foul odor, and didn’t have any weevil.

“The rice was in good condition when we gave it to them,” she told reporters on Tuesday.

In a post on Facebook, Gov. Arthur Yap said that if the rice was smelly and spoiled, it was because they were kept by the municipal government for a long time.

Mayor Calipusan said he was surprised when he learned last week that the rice packs were not claimed by the tourism workers.

“We were shocked to see the rice because it was smelly and had weevil,” she said.

He said some residents, who didn’t return the infected rice, gave it to their animals. Others decided to cook and eat it even if it smelled bad.

Calipusan said he was thankful for the help, but felt sad by the allocation of poor-quality rice for his town.

In 2018, rice infested with weevil was also given to residents of Loon town.

The results of the provincial government investigation showed that the weevil-infested rice came from the buffer stock of the PSWD with Tecson as the head.