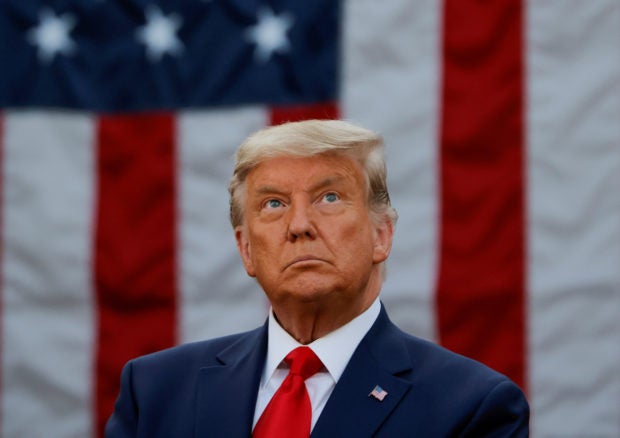 FILE PHOTO: U.S. President Donald Trump pauses as he speaks about the “Operation Warp Speed” program, the joint Defense Department and HHS initiative that has struck deals with several drugmakers in an effort to help speed up the search for effective treatments for the ongoing coronavirus disease (COVID-19) pandemic, during an event in the Rose Garden of the White House in Washington, U.S., November 13, 2020. REUTERS/Carlos Barria/File Photo

WASHINGTON — President Donald Trump on Sunday briefly acknowledged losing the U.S. election in a morning Twitter post but then backtracked, saying he concedes “nothing” and vowing to keep up a court fight that election-law experts say is unlikely to succeed.

President-elect Joe Biden focused on the coronavirus pandemic, setting meetings with vaccine developers as the crisis intensifies. The number of U.S. coronavirus cases passed 11 million on Sunday, a million more new cases than a week ago and the fastest increase since the pandemic began.

Biden defeated Trump in the Nov. 3 election by the same 306-232 margin in the state-by-state Electoral College that Trump proclaimed a “landslide” when he won it in 2016. The Democratic former vice president also won the national popular vote by at least 5.5 million votes, or 3.6 percentage points, with some ballots still being counted.

“He won because the Election was Rigged,” Trump wrote, not referring to Biden by name, adding a list of complaints about vote counting. About 90 minutes later, Trump wrote: “He only won in the eyes of the FAKE NEWS MEDIA. I concede NOTHING!”

After golfing at a club he owns in Virginia, Trump said on Twitter he would soon file “big cases showing the unconstitutionality of the 2020 Election.” Trump’s campaign has filed lawsuits seeking to overturn the results in multiple states, without success.

Legal experts have said the Trump litigation stands little chance of altering the election’s outcome, and election officials of both parties have said there is no evidence of major irregularities.

More than a week after Biden was declared the victor by major news organizations based on state-by-state vote counts, the General Services Administration still has not recognized him as president-elect, preventing his team from gaining access to government office space and funding normally afforded to an incoming administration to ensure a smooth transition.

Some congressional Republicans and former members of Trump’s administration have also called on the White House to allow Biden’s transition team access to more information to prepare to govern.

The health crisis will be a paramount concern for Biden, who takes office on Jan. 20. Klain said Biden’s scientific advisers would meet with Pfizer Inc and other drugmakers starting this week to prepare for the “giant logistical project” of widespread vaccination against a virus that has killed more than 245,000 Americans and thrown millions more out of work.

Pfizer said last week its vaccine candidate proved more than 90% effective in initial trials, giving hope that widespread vaccination in the coming months could help get the pandemic under control.

Other companies also are in advanced stages of developing promising vaccines.

“It’s great to have a vaccine, but vaccines don’t save lives. Vaccinations save lives,” Klain said. “And that means you’ve got to get that vaccine into people’s arms all over this country.”

Speaking on CNN’s “State of the Union,” Anthony Fauci, the top U.S. infectious diseases expert and a White House task force member, underscored the importance of a smooth transition in pandemic control efforts.

“It would be better if we could start working with them,” Fauci said of coordination between the existing task force and Biden’s team.

Biden’s campaign said it had raised $10.5 million of its target of $30 million for a “Biden Fight Fund” aimed at election defense efforts, according to a fundraising plea sent on Sunday.

A laborious hand recount is under way in Georgia, where Biden has been projected the winner and holds a lead of more than 14,000 votes. Patrick Moore, a Biden campaign legal adviser, said the recount had so far shifted vote totals “almost imperceptibly,” and in Biden’s favor, and there had been no evidence of widespread irregularities.

Control of the U.S. Senate will be decided by two January runoff elections in Georgia, which will be important for the fate of Biden’s ambitious legislative agenda. Klain said Biden may campaign in Georgia ahead of the runoffs.