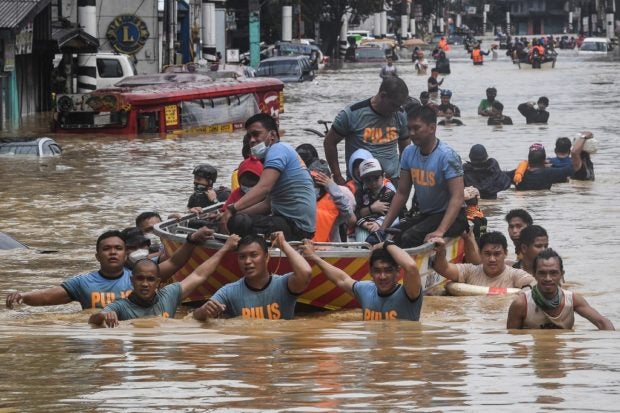 MANILA, Philippines — Evacuees affected by Typhoon Ulysses’ onslaught in Metro Manila and other areas will be given relief aid like food packs and sleeping kits, the Department of Social Welfare and Development (DSWD) said.

In addition to that, DSWD gave assurance that it still has P800 million worth of standby funds and stockpiles like family food packs, non-food items, and sleeping kits — which may be made available to people affected by Ulysses and the other previous cyclones.

“More than P226 million standby funds are available at the CO, and more than 282,000 family food packs (FFPs) and other food and non-food items (NFIs) are prepositioned around the country,” DSWD said in a statement on Thursday.

According to the agency, they have started releasing assistance to various local government units (LGUs) whose residents evacuated after Ulysses slammed Southern Luzon, Metro Manila, and Central Luzon.

As of Thursday afternoon, DSWD’s Field Office (FO) at the National Capital Region (NCR) has already sent out 1,000 family food packs (FFPs) and 250 sleeping kits for Quezon City, and 2,000 FFPs and 400 sleeping kits or Marikina.

Marikina and Quezon City are the two of the most affected areas in NCR, as Ulysses and the previous storms filled up river systems like Marikina River, Pasig River, and other tributaries — causing streets to be flooded.

DSWD also assured that they are working to maintain standards within evacuation centers especially in psychosocial support as well as the observance of minimum health standards to avoid COVID-19 transmissions.

“The DSWD, being the lead in camp coordination and camp management, has also ensures the efficient and effective delivery of protective services to affected families and individuals,” DSWD said.

“Likewise, in ensuring the management of evacuation centers, children and women friendly spaces made available, minimum health standards are practiced (in coordination with the Department of Health), and psychosocial support is extended to Internally Displaced Persons,” it added.

After Ulysses made landfall thrice over over Quezon province from Wednesday night to early Thursdsay morning, it moved towards Central Luzon — affecting a lot of areas from Bicol Region all the way to Metro Manila.

At its peak, Ulysses packed maximum sustained winds of 155 kilometers per hour (kph) and gustiness of up to 255 kph.  As of now, it slightly weakened due to hitting land but remains at the typhoon category.

In just a month’s time — between October 11 to Thursday, November 12 — eight cyclones have already entered the Philippine area of responsibility (PAR).

All but one — Tropical Depression Nika — made landfall.  But apart from Nika, all the other cyclones, from Ofel, Pepito, Quinta, Rolly, Siony, Tonyo, and just recently Ulysses, have hit land.

Like Ulysses, majority of these storms’ track came from the eastern part of the country, from Eastern Visayas, Bicol Region, eastern parts of Quezon, and Cagayan Valley, crossing the Luzon landmass.

Just last November 1, Rolly — which made landfall as a super typhoon — caused extensive damage over Camarines Sur, Catanduanes, and Albay.