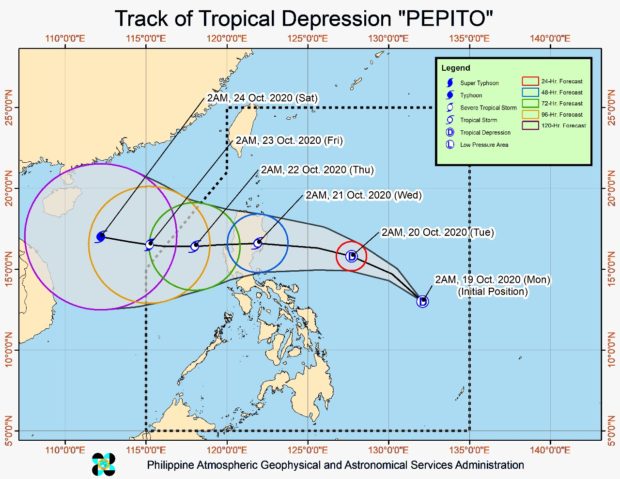 MANILA, Philippines — The low pressure area (LPA) east of the Bicol region has intensified into Tropical Depression Pepito before dawn Monday, the Philippine Atmospheric, Geophysical and Astronomical Services Administration (Pagasa) said, although no tropical cyclone wind signal has so far been raised.

Pagasa, in its 5 a.m. weather bulletin, said the center of “Pepito” was last spotted 820 kilometers east of Virac, Catanduanes.

“Pepito” packs maximum sustained winds of 45 kilometers per hour (kph) near the center and gustiness of up to 55 kph and is moving west-northwest at 20 kph.

It is also forecast to make landfall over the eastern coast of Northern Luzon and Central Luzon Tuesday evening or early Wednesday morning.

Floods and rain-induced landslides may occur during heavy or prolonged rainfall especially in areas that are highly or very highly susceptible to these hazards.

A gale warning has been raised  over the seaboards of Batanes, Cagayan, Ilocos Norte, Ilocos Sur, and Isabela due to rough to very rough seas (2.8 to 4.5 m) caused by the northeasterly surface windflow.

Pagasa warned that sea travel is risky over these areas, especially for small vessels.

Meanwhile, moderate to rough seas (1.5 to 3.0 m) due to “Pepito” and the northeasterly surface windflow will be experienced in the next 24 hours over the eastern seaboards of Central Luzon and Bicol region and the seaboards of Northern Samar and Eastern Samar.

Pagasa advised operators and crewmen of smaller vessels to take precautionary measures while venturing out to sea.