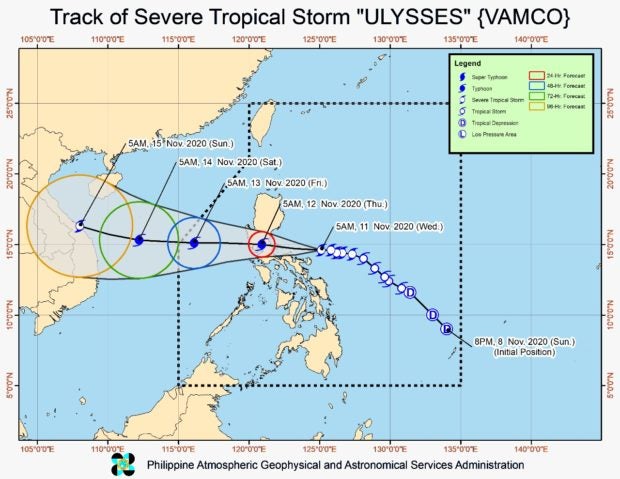 “Ulysses is forecast to intensify into a typhoon within the next 6 to 12 hours and reach its peak intensity of 130-155 km/h prior to landfall. Ulysses may slightly weaken as it crosses mainland Luzon due to frictional effects in the presence of the Sierra Madre and Zambales Mountain Ranges,” Pagasa said in its severe weather bulletin issued at 8 a.m.

“However, it is likely to remain a typhoon throughout its traverse,” Pagasa added.

At 7 a.m., the center of “Ulysses” was spotted 135 kilometers north-northeast of Virac, Catanduanes or 350 km east of Infanta, Quezon. It is moving westward at 20 kph, and has maximum sustained winds of 110 kph near the center and gustiness of up to 135 kph.

Pagasa warned that Tropical Cyclone Wind Signal (TCWS) No. 3 may be raised over several provinces in Bicol Region and eventually over Metro Manila and portions of Calabarzon and Central Luzon once “Ulysses” becomes a typhoon.

TCWS No. 2 is currently raised in Metro Manila and in the following areas in Luzon:

TCWS No. 1 is raised in the following areas:

According to Pagasa, areas under TCWS No. 2 will experience “damaging gale-force to storm-force winds,” while those under TCWS No. 1 will have “strong breeze to near gale conditions” throughout the passage of “Ulysses.”

Meanwhile in other areas, the rest of Northern Luzon will be experiencing strong breeze to gale-force winds due to the surge of the northeast monsoon.

Pagasa said that heavy to intense with at times torrential rains will be experienced over Camarines Norte, Camarines Sur, and Catanduanes between this Wednesday morning and late afternoon.

Moderate to heavy with at times intense rains will be experienced over Albay, Sorsogon, Quezon including Polillo Islands, and Burias and Ticao Islands, while light to moderate with at times heavy rains will prevail in Metro Manila and the rest of Luzon and Visayas.

Meanwhile, moderate to heavy with at times intense rains will be experienced over Cordillera Administrative Region, mainland Cagayan Valley, Catanduanes, Marinduque, the northern portion of Mindoro Provinces, and the rest of Central Luzon. The rest of Luzon and Visayas will have light to moderate with at times heavy rains.

“Flooding (including flashfloods), rain-induced landslides, and sediment-laden streamflows (i.e. lahar) may occur during heavy or prolonged rainfall especially in areas that are highly or very highly susceptible to these hazards and/or those that received significant antecedent rainfall,” Pagasa said.

Pagasa said “Ulysses” will move generally westward throughout the forecast period and pass over the seas north of Catanduanes between this Wednesday morning and afternoon and north of Camarines Provinces between Wednesday afternoon or evening.

“Due to the orientation of the track forecast, these provinces may fall within the inner rainbands or eyewall region of this storm during the passage,” the weather bureau added.

The center of “Ulysses” is forecast to make landfall over Polillo Islands and mainland Quezon between this Wednesday night and Thursday early morning. Afterwards, it will cross mainland Luzon and emerge over the western seaboard of Central Luzon between Thursday morning and afternoon.