Ulysses intensifies, Signal No. 3 may be raised before landfall over Bicol Region 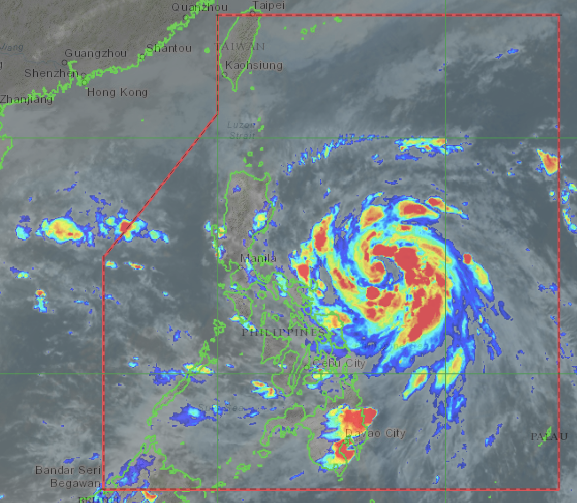 MANILA, Philippines — Tropical Storm Ulysses further intensified as the state weather bureau raised the possibility of a Tropical Cyclone Wind Signal No. 3 being raised before making landfall in the Bicol Region on Wednesday.

According to the Philippine Atmospheric, Geophysical, and Astronomical Services Administration (Pagasa), Ulysses is expected to intensify into a severe tropical storm category by Tuesday night — and if conditions are favorable to the cyclone, it may rapidly become reach typhoon category.

Pagasa predicts that Ulysses may make landfall over Quezon province between Wednesday afternoon and night. However, it acknowledged an increasing likelihood that the storm would make a slight southward nudge and move toward the Bicol Region instead.

As of now, Ulysses was last seen 375 kilometers east northeast of Virac, Catanduanes, with maximum sustained winds of 85 kilometers per hour (kph) near the center and gustiness of up to 105 kph.

It is moving on a northwestward pattern at a speed of 15 kph. 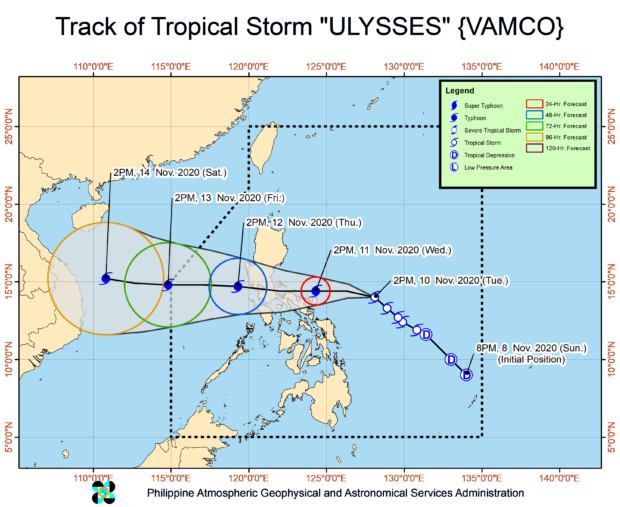 By the next 24 hours or Wednesday afternoon, Ulysses is expected to be just 90 kilometers north of Virac, Catanduanes — one of the provinces hard hit by Super Typhoon Rolly when it barreled into the Bicol Region last November 1.

Before it makes landfall, it may already be a typhoon category storm.  It would then cross Southern Luzon all the way to the southern portion of Metro Manila before exiting to the West Philippine Sea.

Due to Ulysses’ threat, Tropical Cyclone Wind Signal No. 2 has been raised in several areas as these may experience wind speeds of 61 kph to 120 kph:

Signal No. 1, meanwhile, is hoisted on the following areas:

By Thursday afternoon, it would be 110 kilometers west of Subic, Zambales, before exiting the Philippine area of responsibility (PAR).

However, Pagasa clarified that Ulysses still has a wide cone of probability, which means that it can either stray north toward Quezon province or Central Luzon and further south toward Eastern Samar.

Pagasa also advised seafarers against traveling in areas where wind signals are raised as sea conditions may be rough to very rough. [ac]