Ulysses veers towards Quezon, may become typhoon in 12-24 hours 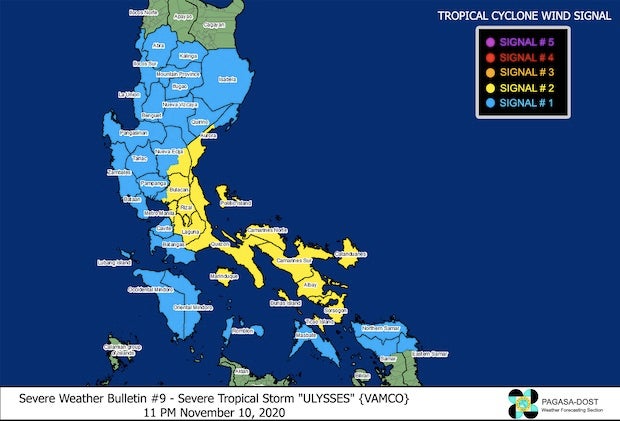 This was the latest bulletin issued on Tuesday by the Philippine Atmospheric, Geophysical and Astronomical Services Administration (Pagasa).

The previous bulletin predicted a landfall for Ulysses over the Bicol Region, which was recently ravaged by Super Typhoon Rolly.

Still, Pagasa said Ulysses would make a close approach towards Catanduanes on Wednesday morning, then near Camarines Sur and Camarines Norte by afternoon.

As of this writing, Ulysses still had maximum sustained winds of 95 kph near the center with gustiness reaching up to 115 kph.

It had moved closer to land, at around 425 km east of Daet, Camarines Norte.

It was still moving north at 30 kph.

Once it hits Quezon province, it’s expected to move through the rest of Southern Luzon, possibly directly crossing Metro Manila before going out through Manila Bay by Thursday.

It may then leave the Philippine area of responsibility by Friday.

Metro Manila was put under Tropical Cyclone Wind Signal No. 2, along with the following areas:

The following areas were put under Signal No. 1:

Pagasa may still place some areas under Signal No. 3 since Ulysses could still intensify into a typhoon.

Strong winds would be felt over areas under wind signal warnings as Ulysses passes over them.

Moderate to heavy rains with at times intense rains may fall over Catanduanes, Camarines Sur, Albay, Sorsogon, and Northern Samar.

On Wednesday, light to moderate with at times heavy rains may fall over Aurora, Quezon (including Polillo Islands), Marinduque, and the rest of Bicol Region and Eastern Visayas