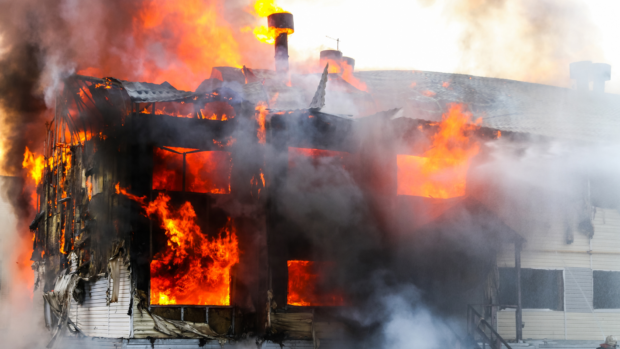 A 70-year-old war veteran risked his life to rescue his neighbors when a fire ravaged their home in Illinois in the  United States.

Marshall Helm was walking his granddaughter to the bus stop on Oct. 21 when his neighbors’ home began catching fire.

“Bus driver hung out the door and tried to get my attention and he said ‘fire, fire, fire,’” Helm told CBS-affiliate KMOV on Oct. 24.

“And I looked over here and sure enough, I saw a fire coming through that window,” he recalled.

Upon seeing the flames, the veteran rushed over to his neighbors’ house and opened a door on the side of the garage. The fire was already climbing a wall, but he managed to get past them safely and entered the house.

“I was hollering ‘fire, fire, you got to get out of here. Anybody in here.’ And I kept repeating, ‘is anybody in here,'” he said in the report.

Thanks to his screams, his neighbors Gary and Kathy Benjamin eventually woke up from their sleep. After realizing their house was on fire, they ran out of bed and eventually found Helm before they all left the home through a backdoor.

Following the incident, the couple assured that they were not injured, but had inhaled a lot of smoke. They also noted that the accident had burned 40 years’ worth of their belongings.

“All I saw was flames coming through the wall,” Gary stated.

Though Helm is currently battling cancer, he said that he did not hesitate to run into the burning home to save his neighbors.

The couple also expressed their gratitude for his bravery and called him their “hero” and “angel.”

The flames started due to a heat lamp that fell inside the Benjamins’ garage, as per report. The light was used to keep chicks warm in their garage.

Following the accident, the couple are now trying to recover and set up a crowdfunding page to seek financial assistance. They have since gained $1,647, as of this writing. Ryan Arcadio /ra