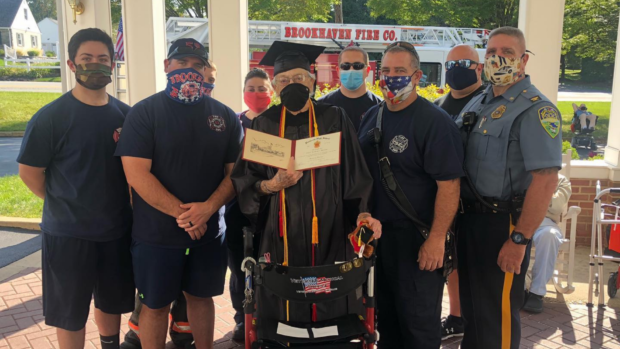 “It’s exciting because I never expected it, I really never did. This is a far dream of this ever happening to me,” he told ABC-affiliate WPVI last Thursday, Oct. 8.

Montella’s loved ones accompanied him in a simple ceremony to receive his special gift. Among them were the crew from the Brookhaven Fire Company where his two grandsons serve as a chief and an engineer, while his great-grandson is a lieutenant.

The team also marked his milestone by posting a photo of them on Facebook.

“Continue to drink your wine and eat your pizza on Friday nights!!” the department said.

The soon-to-be centenarian wore a black cap, toga and face mask as superintendent Dr. Eleanor DiMarino-Linnen handed him his diploma.

The war veteran did not finish high school because he left his studies back in 1938 to support his family, as per report. He also enlisted in the U.S. Navy to serve in World War II.

“He served our country, he’s supported and helped his community and all of that without asking [anything] in return,” Dr. DiMarino-Linnen was quoted as saying. “So at the age of 100, we get to finally honor him in some small way.”

“His story says that you never give up. No matter what happens in your life, there’s always an opportunity for you to achieve a goal,” Harrison told the news outlet.

After getting his diploma, Montella also shared a few wise words with the public.

“I just say I want to wish everyone the same luck I had living this long,” he added, “and loving people and being nice to people.” Ryan Arcadio/JB