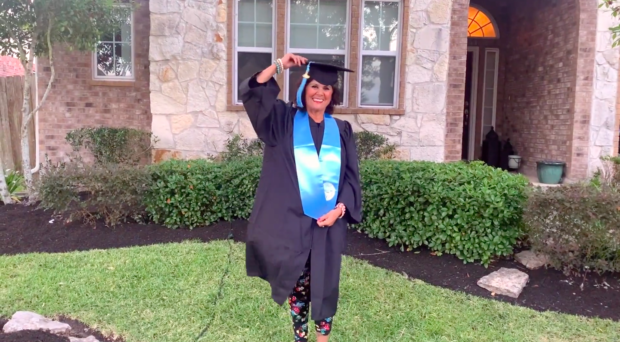 Rosa MacDonald-Burns in her graduation cap and gown (Image: screengrab from Vimeo/Herbert MacDonald)

A 70-year-old mother with four sons graduated from college last Saturday, June 13, proving that it is never too late to further one’s education.

Rosa MacDonald-Burns earned her bachelor’s degree in applied technology from the Brazosport College in Texas, United States, as per NBC-affiliate KPRC on June 14.

The institution hosted online commencement exercises for the mother and her fellow graduates in place of an in-person event due to the COVID-19 pandemic. While she was not able to celebrate with her peers and loved ones, MacDonald-Burns’ family surprised her with a short video to mark her achievement.

The thoughtful gesture was organized by her son Herbert, which he uploaded on Vimeo. The surprise featured MacDonald-Burns’ family and friends who all congratulated her. In between the videos, Herbert also included quirky clips of the fictional characters The Muppets.

As the surprise cut to MacDonald-Burns dressed in her cap and gown, the traditional graduation anthem was replaced with the 1984 hit “Footloose” by Kenny Loggins, which her grandkids danced to.

While the college has canceled in-person celebrations due to the health crisis, they have already set a new date for the traditional commencement exercises. MacDonald-Burns and her peers may opt to attend the physical graduation next May.

The mother of four originally lived in Santiago, Chile, before moving to the US, as per ABC-affiliate KTRK-TV. She pursued her studies while working at a chemical company, but has since retired from her job. Ryan Arcadio /ra