‘Pepito’ prompts suspension of some classes, work on Wednesday, Oct. 21 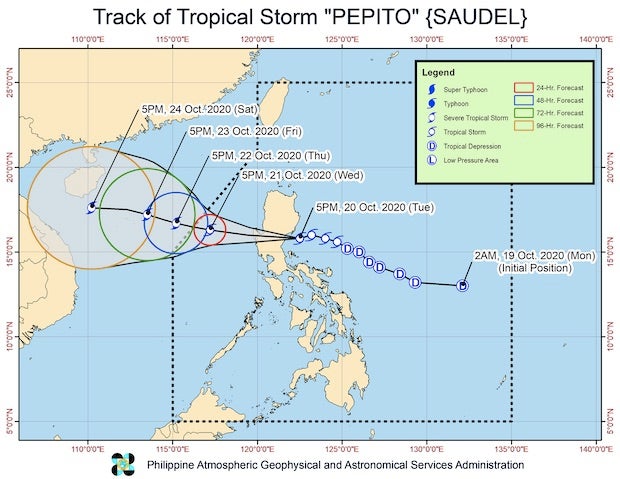 MANILA, Philippines — Some local governments and schools opted to suspend work and classes for Wednesday despite the prevalence of online classes and work from home schemes during the COVID-19 pandemic.

The suspensions were declared on Tuesday as a precaution for bad weather brought about by Tropical Storm Pepito as it barreled into Aurora.

The storm, internationally known as Saudel, was expected to cross the Luzon landmass between Tuesday night and Wednesday morning.

The suspensions apply in the following areas:

La Trinidad, Benguet – government work and classes in all levels, public and private

According to the government of La Trinidad, the suspension of government work and classes would allow families to prepare better for the storm, considering that Benguet and other areas in the Cordillera Administrative Region had been put under Tropical Cyclone Wind Signal No. 2.

The management of the Our Lady of Perpetual Succor College Marikina said it suspended classes to avoid possible internet connection issues as signals might be disrupted by the continuous rains.

The hashtag #WalangPasok trended on Twitter as a joke, as people pointed out that classes might not be suspended considering that they were conducted online anyway.

But as it turned out the storm might also affect online classes.

Earlier, Pepito slightly intensified, packing maximum sustained winds of 75 kilometers per hour near the center, with a gustiness reaching up to 90 kph, according to the Philippine Atmospheric, Geophysical and Astronomical Services Administration (Pagasa).