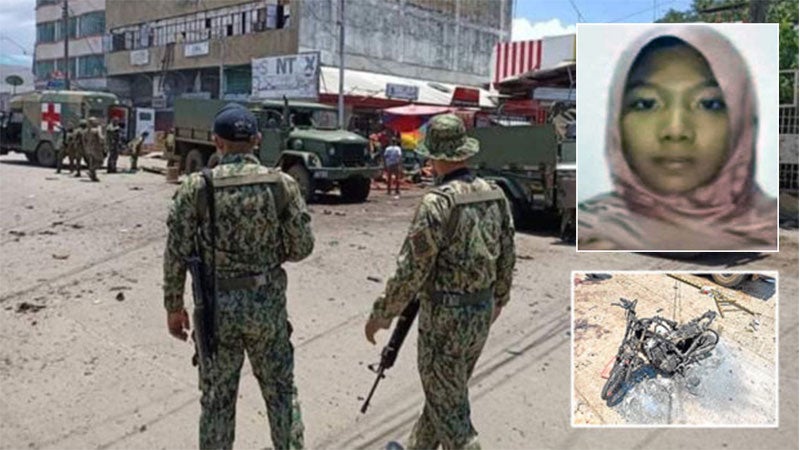 MANILA, Philippines — An Indonesian suicide bomber, who is believed to be the daughter of the couple behind the Jolo blasts in January 2019,  and two others were arrested in Jolo, Sulu early Saturday.

The Joint Task Force Sulu said Rezky Fantasya Rullie, also known as “Cici” was arrested at around at 1:50 a.m. in a house believed to be owned by Abu Sayyaf sub-leader Ben Tatoo in Barangay Raymundo.

Also arrested during the operation were Tatoo’s wife, Inda Nurhaina, and Fatima Sandra Jimlani, who is the wife of an Abu Sayyaf member.

Seized from the site of the arrest were suicide vests rigged with pipe bombs and other improvised explosive devices, the Joint Task Force Sulu reported.

“We have been pursuing foreign terrorist suicide bombers in Sulu after the twin bombing of Jolo town last August 24, 2020,” said Brig. Gen. William Gonzales, JTF Sulu Commander, referring to the bombings that killed 11 people and wounded 24 others.

“Rullie was first on our list since we have received intelligence reports that she is going to conduct suicide bombing after the death of his husband, Andi Baso, an Indonesian foreign terrorist who was reportedly neutralized during an encounter last August 29, 2020 with two (2) Scout Ranger Battalions under 1102nd Brigade in Patikul, Sulu,”  he added.

Rullie, according to the JTF Sulu, is believed to be the daughter of the Indonesian couple behind the twin explosions that rocked the Jolo Cathedral on Jan. 27, 2019.

Rullie, Nurhaina and Jimlani are currently detained at the Criminal Investigation and Detection Unit of the Sulu Police Provincial Office, the JTF said.