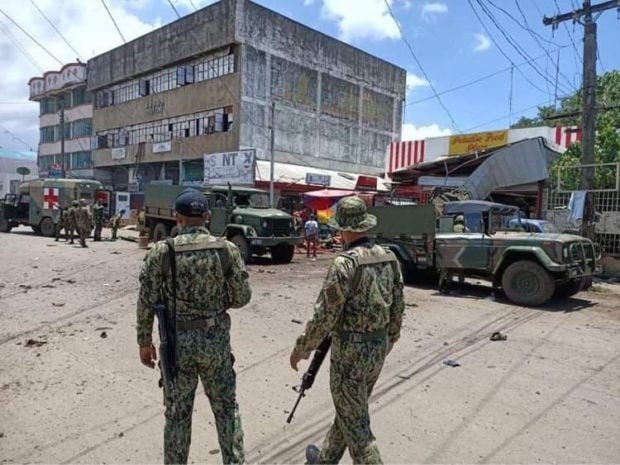 Initial scene at Serrantes Street in Jolo, Sulu, where an explosion happened at about noontime on Monday. CONTRIBUTED PHOTO

UPDATED 4:00 P.M., 24 August 2020, to reflect latest information on the incident from the military

Major General Corleto Vinluan Jr., commander of Western Mindanao Command (Westmincom), told reporters that five soldiers were killed and 16 others were wounded from the first explosion, which he earlier said occurred 11:54 a.m. inside Paradise Food Shop beside the Syntax computer shop on Serrantes St., Barangay Walled City in Jolo, where a military truck was parked.

An hour later, at 12:57 p.m., another powerful explosion occurred at the Goteckleng Building, only a hundred meters away from the site of the first blast.

“(We) lost four soldiers, 17 others (are) wounded,” Vinluan said. “There are civilians but we don’t have the data yet because our men are still assessing the area,” he told the Inquirer earlier.

“Some (are) in police uniforms, some in military uniforms. It’s quite chaotic here, we cannot provide exact details right now,” he said.

“It was a deafening sound. We immediately closed our shops,” said a pharmacy owner in the area. “Upon reaching home, the grounds shook (when) another explosion (occurred), just near the first one.”

“Flesh, bones scattered on the streets, mostly uniformed personnel,” the pharmacy owner said. “I guess they (belong to the Philippine) Army.”

“There were Badjao vendors and children on that street, there were food stall vendors, too. We are really afraid,” he said.

Vinluan said his ground commanders recovered a burned motorcycle in the area. “Only one can make this kind of attack, Mundi Sawadjaan, the bomber of the Abu Sayyaf,” he said.

He has directed his men to hunt Sawadjaan and to cordon the place and secure the places where the blasts took place, he said.

“Right now, all we can say is, (what caused the explosion is) an improvised explosive device. We will have details later,” Vinluan said.

Subsequently, Armed Forces of the Philippines spokesperson Maj. Gen. Edgard Arevalo said in a statement that security forces in Sulu are on high alert following the explosions.

“The 11th Infantry Division and the Joint Task Force Sulu are on high alert following this incident,” he said.

He urged the public to stay calm but remain vigilant of their surroundings, and report “any suspicious persons or items or unusual activities in the area.”

“At the moment our troops on the ground are evacuating and providing treatment for the casualties while securing the area,” Arevalo said.