The National Task Force to End Local Communist Armed Conflict (NTF-Elcac) does not have to provide P16.4 billion worth of development projects to barangays already freed from communist rebel influence, according to Sen. Risa Hontiveros, who said the money would be better used for health programs.

Under the government’s anti-insurgency campaign, 822 remote barangays will each get P20 million from the fund allocated in the 2021 budget of the task force to improve the conditions of the villages to prevent them from being swayed again by the New People’s Army (NPA), the military wing of the Communist Party of the Philippines.

Such development projects could be handled by existing departments, Hontiveros said at Thursday’s hearing on the 2021 budget of the Department of the Interior and Local Government.

She said the task force itself was a nonessential agency and expressed concern that the P16.4 billion might be used for the next elections or to curry political favors.

“The NTF-Elcac entered the picture even if the script of good local governance, of the interior, is clear to address the roots of the insurgency. It appears the NT-Elcac is miscast,” Hontiveros said, calling the task force a “surplusage.”

The task force members include department secretaries, the military and police chiefs, and two representatives from the private sector.

At an online press briefing also on Thursday, National Security Adviser Hermogenes Esperon, the NTF-Elcac vice chair, defended the proposed allocation for the so-called Barangay Development Program (BDP). He said those who opposed it could be rebel supporters.

He said the allocation had been unjustly called a pork barrel fund, citing allegations by the progressive Makabayan bloc in the House of Representatives. 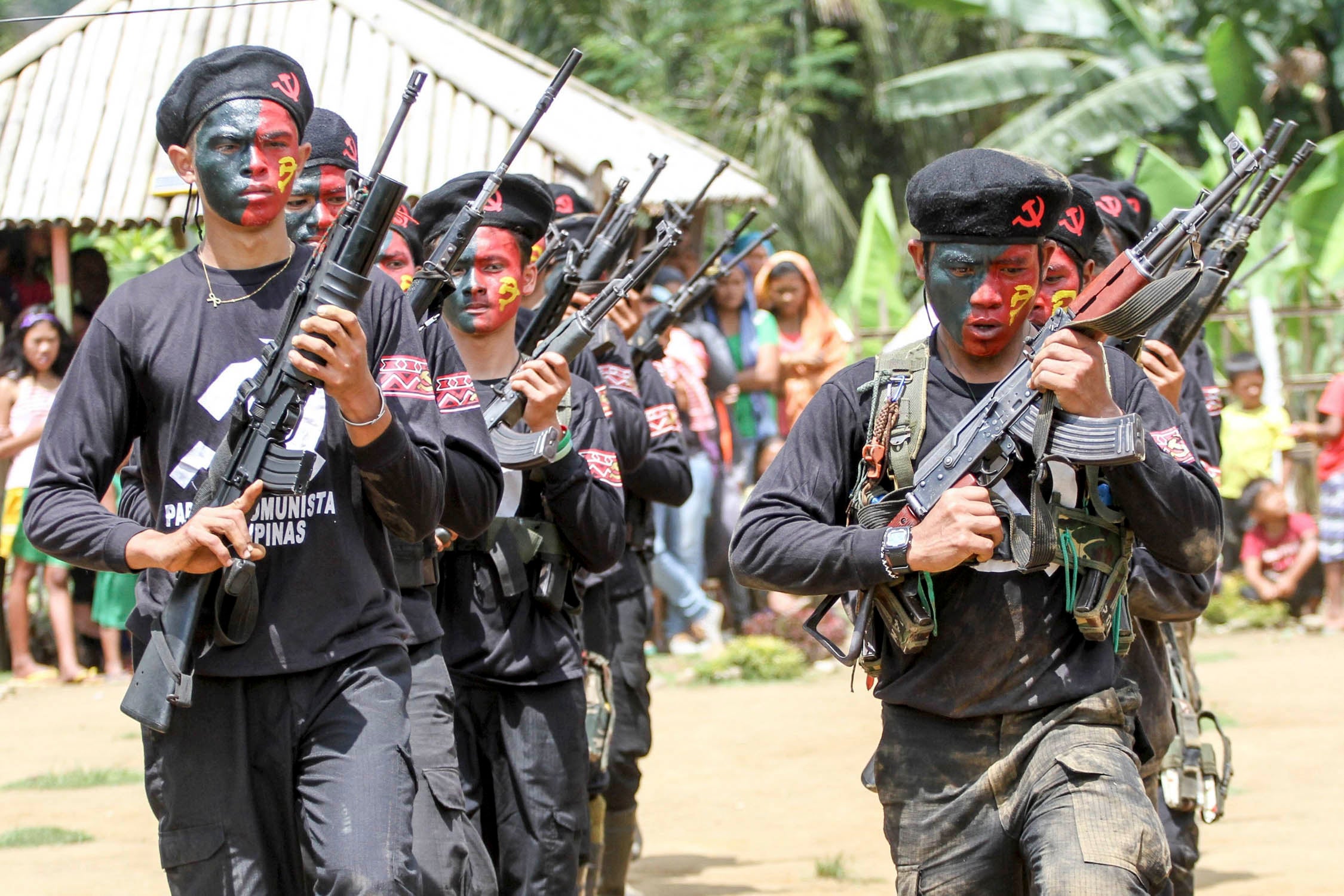 REBEL INFLUENCE A group of New People’s Army fighters march in formation during ceremonies where the rebels released captured government soldiers in this April 19, 2017, photo taken in Davao del Sur province. The government says it will use P16.4 billion to develop 822 remote villages to keep them away from rebel influence. —AFP

“I categorically state that these accusations are unfounded and without merit,” the former military chief of staff said. “Do not say that this is a pork barrel of General Esperon because the DBM (Department of Budget and Management) will release it to the municipalities.”

Hontiveros said she planned to make a formal motion to realign the money and allocate it for health facilities and for epidemiological surveillance units.

She was surprised that amid the pandemic, P16.4 billion was allocated for an anti-insurgency program while the budget to create more rural health facilities was only P4.7 billion.

The budget for epidemiological surveillance units, which collect data about notifiable diseases, was only P112 million, much smaller than the P547 million the Department of Health asked for, she added.

Hontiveros also noted that the P16.4-billion allocation was so much bigger than the P700-million budget of the Office of the Presidential Adviser on the Peace Process, which was chopped down from P19 billion.

“That’s the budget of an agency with an actual mandate to address the insurgency, but it was slashed,” she said.

Interior Secretary Eduardo Año said the NTF-Elcac was a “coordinative body” that was necessary because the different departments were “working in silos” and needed “convergence.”

It would ensure the commitment of the entire government machinery in efforts to address the communist insurgency, Año said.

The departments, in carrying out their projects, may not necessarily be focused on areas affected by the insurgency, he said.

The concerned departments would still handle the barangay projects and the NTF-Elcac would ensure the community would have a say in the project so that it would not be the national government alone that would make the decision, he said.

Hontiveros said the role of the NTF-Elcac was “overstated and overfunded” as she disputed the lack of coordination among government agencies.

“I still believe it is the existing line agencies that should shoulder the different mandates that you say the NTF-Elcac would coordinate,” she told Año. But the secretary said the task force had no say in deciding which barangays would get the fund.

No funds would be left to the NTF-Elcac either as the allocation would be released to the local governments, Año said.

He noted that the 822 barangays were not vote-rich and are far-flung, so it could not be said that the program would be used for the elections.

In his briefing, Esperon said the BDP was “part of a whole-of-nation approach in finally solving the decadeslong insurgency problem, which has long stunted the growth of our country.”

He said the program “is a novel and unified approach in responding to the root causes of insurgency, such as hunger, disease, poverty, injustice and hopelessness.”

The specific projects under the program were requested by local authorities who will implement them, Esperon said.

“[The] NTF-Elcac shall provide the coordinating and convergence mechanism between the national and local levels of government,” he said.

Esperon asked Congress to approve the budget, saying “we owe our disadvantaged countrymen in impoverished communities a chance to better themselves.”

“Without these holistic development programs, they shall always fall victim to the empty promises and the propaganda being espoused by the terrorist communist group or the CPP-NPA-NDF,” he said.

President Duterte created the task force, which he chairs, through an executive order on Dec. 4, 2018, a week after he declared “no more talks with the NPA.”

He formally ended the talks a year earlier, and efforts to revive them were unsuccessful. In March 2019, Duterte said he was permanently terminating the talks.