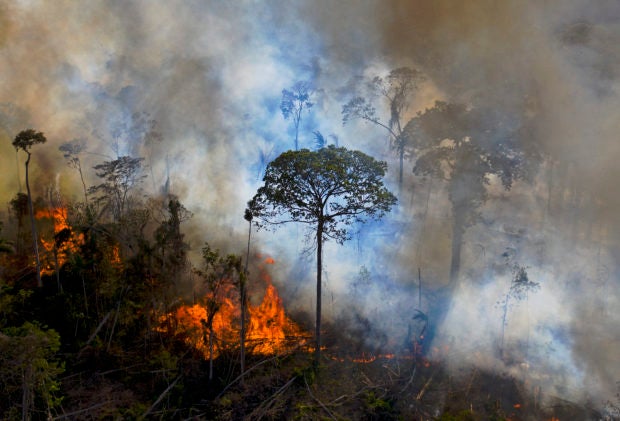 The National Institute of Space Research (INPE) said satellite imagery showed an increase of 61 percent in the number of fires in September, compared to the same period last year.

Satellites used by the institute detected 32,017 outbreaks last month in the Amazon, compared to 19,925 in the same month in 2019.

In the first nine months of the year, the total number of fires increased by 14 percent over the same period in 2019, the INPE said.

Despite the data from INPE, a world-renowned public body, Bolsonaro has continued to denounce a campaign of “disinformation” about the Pantanal and the Amazon.

On Wednesday, Bolsonaro — an ally of US President Donald Trump — lashed out at US Democratic presidential candidate Joe Biden for “disastrous and unnecessary” comments on destruction of the rainforest.

Biden said during the first presidential debate that if elected in November, he would raise $20 billion to help Brazil to “stop tearing down” the Amazon, threatening “significant economic consequences” if it did not.

– Bolsonaro backlash –
Later, in a video address to a UN biodiversity summit, Bolsonaro said Brazil was “firm in its commitment to sustainable development and preserving our environmental wealth.”

Most of the Amazon fires consist of agricultural burning on illegally deforested areas, even though the government banned all burning for four months from July.

Further south, in the Pantanal — the world’s largest wetlands — the number of fires have almost tripled to 8,106, making September 2020 the worst month since the INPE began compiling statistics on the fires in 1998.

“Brazil is in flames. From the Amazon to the Pantanal, the environmental heritage of all Brazilians is being reduced to ashes,” Christiane Mazzetti of Greenpeace in a statement.

“The is a consequence of the policy of the Bolsonaro government, which despite the predictions of drought in the Pantanal, has not used the necessary means of fire protection,” she said.

The situation in the Pantanal, straddling Brazil, Paraguay and Bolivia, has been exacerbated by the worst drought in half a century.

The fires have ravaged 23 percent of the Brazilian part of the Pantanal, acording to data collected by scientists at the Laboratory for the Application of Environmental Satellites (LASA).

– Growing investor pressure –
The wildfires that devastated the rainforest last year triggered an international outcry, forcing Bolsonaro onto the defensive. He ultimately deployed the army to the Amazon to fight the fires.

So far this year, despite an increase in fires, the deforestation rate is down by about five percent.

But Brazil is coming under increasing pressure from allies, trading partners, international investors and powerful voices in the business world over the scale of the deforestation.

In June, 29 global investment firms managing nearly $4 trillion in assets sent an open letter to Bolsonaro, urging him to change policies blamed for accelerating the destruction of the rainforest.

Environmental destruction by Brazilian agribusiness firms is also threatening a long-sought trade deal between the European Union and the Mercosur bloc, of which Brazil is a member.